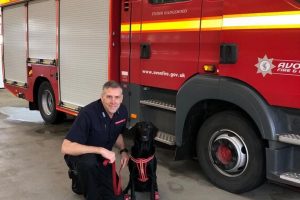 Arson and deliberate fires are serious crimes which take up valuable time from Avon Fire and Rescue Service, when crews could be dealing with other major incidents.

Therefore, the service needs all the help it can get when it comes to finding and detecting deliberate fires across Bristol.

And so a Fire Dog called Jet, introduced to the service in February last year, provides much-needed assistance when he sniffs out and detects deliberate fires.

The five-year-old black Labrador is part of the service’s fire investigation team and and has assisted at the scenes of deliberate fires across the service area here in Bristol, including discovering that the Guildhall Fire was a deliberate act.

The role of a fire investigation dog is to use its highly-tuned sense of smell to find traces of accelerants which may have been used to deliberately start a fire.

Accelerants are substances, such as petrol, which help a fire to spread more quickly.

Even when a fire has been put out, fire investigation dogs can still smell exactly where an accelerant was used.

When Jet finds traces of an accelerant he lets handler Martyn Bolt know by ‘freezing’ and placing his nose close to where the substance has been found.

Jet was born in May 2013 and was selected at a young age based on his drive for play and ability to follow a positive reinforcement training programme, which rewards him with a tennis ball each time he detects an ignitable substance.

He is a quick learner and in September 2013, aged 16 weeks, was enrolled on a 12-week fire investigation dog training course.

Jet completed his training with flying colours in January 2014 and became the youngest dog to ever pass the course.

Despite being operational for some time, Jet was taken out of service while a search took place for a new handler.

However, he eventually found a new handler in Martyn.

Martyn said: “I’ve been part of the service for 23 years and have had extensive fire investigation training.

“When it was clear Jet needed a new handler and that the service could use him in a positive and proactive way, I jumped on the opportunity.

“Jet really is exceptional at what he does. He is able to help the service identify ignitable substances which could have been used to start a fire and it never ceases to amaze me when he locates the source of a fire.”

“I’m proud to be his handler and I look forward to working with him over the coming years.”

Jet is sent into cold fire scenes to search for evidence of ignitable liquids, identifying the areas they were used in, which are documented before samples are taken by the police for analysis.

The speed and accuracy of the dogs can save both police and fire investigators valuable time and resources.

When investigating fire scenes, Jet wears boots to protect his paws from any shards of glass or other sharp objects and also have his own personal protective equipment (PPE).