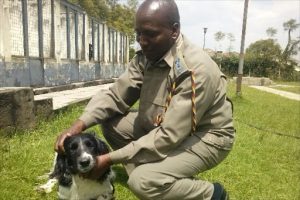 The friendship between man and dogs is one of the most notable and common relationships between humans and animals.

No one knows exactly when this bond began, but historians believe that dogs were the first animals to be domesticated by humans.

Various folktales and theories have emerged to explain how man’s relationship with their furry friends began.

The early man used to follow trails of wolves while hunting before the two parties developed a relationship out of necessity.

“With time, wolves came to rely on man’s superior hunting skills that provided them with a surplus of food. Conversely, human beings depended on wolves for their sense of smell to locate their prey,” Derr says.

A scholarly project by Ya-Ping Zhang of the Chinese Academy of Sciences estimated that the evolution of wolves into dogs occurred 32,000 years ago in East Asia.

Another study by Robert Losey of the University of Alberta unearthed canine graveyards that were created around 8,000 years ago.

The manner in which the dogs were interred indicated the affinity that man had for his canine buddy.

“Some of the dogs were placed in sleeping position, while others were adorned with ornaments. Other people chose to be buried close to their dogs,” Losey says.

Former US President George HW Bush’s bond with Sully, his service dog, brought to the fore the caring and compassionate character of dogs.

Sully, who had served the former president for six months in 2018, paid a moving tribute to America’s 41st president by lying next to his casket when he died in November 2018.

He was among mourners who accompanied Bush’s body as it was flown on Air Force 1 en route to his burial.