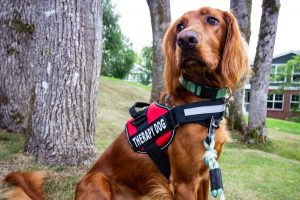 Police in Halton are preparing to unveil their latest recruit – a therapy dog to be deployed in the coming months.

The scheme, discussed at a recent Halton Borough Council safer policy and performance board (PPB) meeting, would make Cheshire the first force in the North West to embrace the mood-enhancing benefits of humanity’s best friend and potentially the first in the country to do so on an in-house basis.

A report published ahead of the of PPB meeting said it is hoped the dog will not only aid officer wellbeing and victim engagement in the Northern Area division, but also in helping to steer the borough’s youth away from potentially harmful situations.

It said Essex Police is the sole force in the UK with a volunteer therapy dog, Baloo, who was injured in a collision and is now handled by a dog officer.

The report said Baloo has been a “huge success” and helped officers process the trauma of discovering a wagon containing 39 dead smuggled migrants.

Devon Police hires a dog to bolster morale in its control room.

It is anticipated that the Cheshire Northern Division’s therapy canine will be used in school visits and at youth events including across Runcorn and Widnes, Cheshire, as well as to promote mental health and cyber safety campaigns on social media.

The scheme is expected to be funded by a combination of the Cheshire Crime Beat charity, the Cheshire dog unit, and the potential to draw commissioner cash to pay for officer training.

A borough business has also offered to support the initiative.

The report said no other force has adopted a therapy dog scheme assigned to a regular officer, as Essex’s is a voluntary project.

Among those welcoming the plans was Inspector Becky Stokes, of Widnes Local Policing Unit, who tweeted: “Can’t wait for our wonderful therapy dog to land at Widnes – he will be a ray of sunshine.”

Describing the dog’s anticipated benefits, the report said: “It is also proven that the process of patting and stroking a dog reduces the blood pressure, promotes relaxation and changes your physiological state into a more relaxed mode.

“Dogs in a workplace/school can lessen the overall stress of an environment especially when working with younger people.”