How some local shop mascots are adjusting during pandemic 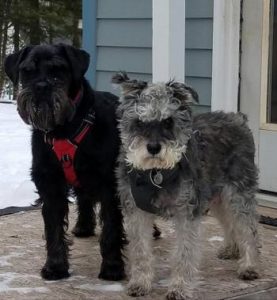 CAMDEN/ROCKPORT/ROCKLAND – Shop animals do not receive regular paychecks, although many may consider them staff and members of the business community. They are usually at their offices daily and have loyal customers who combine supporting businesses along with getting their “regular animal fixes” at the same time.

If shop animals could take the Myers Briggs personality test to determine how they perceive their worlds, chances are their scores would include “E” for extroversion, “S” or “I” for sensing and intuition, and a “F” for feeling.

But with the restrictions associated COVID-19, which has affected small business in a variety of ways, the routines of these special animals have also changed.

In Camden, Stacey Warner, owner of Warner Graphics, and who has a “shop cat,” James, was required to close her business to the public at the beginning of the COVID-19 pandemic. She is now working from her home.

After Warner locked the front door at her shop, she put James in his travel carrier and took him home with her.

James, has been the official “shop cat” at Warner Graphics since November 2016, when he took over the reins of the original feline “customer service manager,” Dennis, after he died of cancer a few months prior.

James is a handsome orange cat who is also “polydactyl,” meaning he was born with more that the usual number of toes on his paws which makes them bigger.

James has been sequestered in a spare bedroom at his mom’s house since late March, where he has to stay during the quarantine to keep his distance from Harry, another one of Warner’s rescue cats.

Warner said Harry’s philosophy about feline interactions is that “defense is the best offense,” so they are not spending time together, especially since James is also a newcomer at the house.

How is James adjusting to being away from his office and fan base?

“James is very outgoing and loves his public,” Warner said. “He literally went wild one night. Just us and one small room is not his choice. This is not his public.”

She added that he’s also getting pretty annoyed about his quarantine situation, even though she has been working in the bedroom room to keep him company.

There is no doubt James will be thrilled when he can return to his wrap around counter at the shop, the spot where he conducts his business, or snuggle inside an empty box lying around for an afternoon siesta.

On Route 1 in Rockport, Jeff Hall, owner of Jeff’s Vacuum, has remained open, but is only conducting curbside service in the parking lot.

Hall has two official greeters at his shop, Max and Tucker, who are father and son golden retrievers.

“It’s all about dogs at Jeff’s Vacuum,” according to Hall.

In the days before COVID-19, Max and Tucker were often spread out or standing by the front door eagerly waiting for the next customer to enter the store.

He said that his boys are “just not happy” about the way he is doing business right now since they have to remain inside.

“They are not getting their regular loving and are unhappy boys,” Hall said.

“Max and Tucker are people pups. Both the dogs and my customers are missing their daily fixes of affection,” he added.

One of Hall’s regular customers summed up Max and Tucker’s situation perfectly by saying, “they don’t understand why people aren’t visiting or petting them.”

Hall did admit that the boys have “busted out” out the door a few times to visit with customers.

Many of his customers are still spoiling the boys by dropping off treats and toys. Hopefully, soon they will be able to deliver their gifts in person.

At Long Funeral Home in Camden, co-owner Julie Clement along with her business partner John Long, shared how her therapy dogs, Bentley and Bailey, both schnauzers, are helping to ease the stress during COVID-19.

Normally the dogs would be at the front door greeting families who arrived for appointments at the funeral home, but Clement said “that they have not been seeing families as we normally would the past few months.”

Farewell gatherings and funerals are currently not being held and are delayed due to the virus.

“Funeral home professionals are doing their very best to make sure that both individuals and their families are being comforted at this time of need within the restrictions and guidelines they are forced to comply with,” Clement said. “It’s not as easy as it sounds.”

For now, Bentley and Bailey have been mainly focused on providing comfort for the staff at the funeral home. Bentley is seven years old and Bailey, who is over 15, is now experiencing multiple health issues so his routine is at a slower pace.

Clement said that Bentley is like a kid. He is full of energy and love, spreads his toys all over the office and does not always want to stay inside his gate in the office.

“The dogs do a lot for the staff. They help us stay focused, make us laugh, and provide a much-needed break like taking a walk in the fresh air during the day,” Clement said.

During these challenging times, the lyrics from the Beetles song, “With a Little Help From My Friends,” may also describe these human and animal bonds.

“How do I feel by the end of the day? Are you sad because you’re on your own? No, I get by with a little help from my friends,” the Beetles sang.