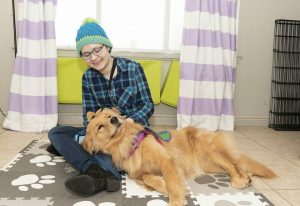 For most of her life, 15-year-old Homewood resident Rachel Smolin has been under constant watch. She has epilepsy, so being alone for even five minutes could mean that a seizure goes unnoticed for too long.

But with the help of Trixie, a golden retriever service dog, Rachel could eventually live a safe, independent life.

Rachel had her first seizure when she was 2.5 years old. Her mother, Desiree Smolin, said she tried to be everywhere at once so she could always watch Rachel. But an incident in 2015 made her realize that was impossible.

They had just walked into their house, and Rachel went to the bathroom. The rest of the family got to talking and lost track of time. Before they knew it, 30 minutes had passed, and Rachel still hadn’t come back from the bathroom.

“We ran back there, and she was in a seizure,” Desiree said. “We had no idea whether she’d been in it for half an hour or for 30 seconds.”

They asked Rachel’s doctor for his opinion on a service dog for Rachel.

“He was like, ‘We tend to reserve those for kids who have more severe cases, so I just don’t think she needs one,’” Desiree said.

But after two more years of Rachel’s seizures getting progressively worse, the doctor decided to give Rachel a prescription for a service dog.

The Smolins looked at organizations all over the country, but they ran into some issues. Some service dog organizations won’t work with children. Others have about a five-year waiting list.

Then they found Roverchase, which is located in Pelham, a short drive from their house in Homewood.

“It ended up being good timing for us,” said Abigail Witthauer, who owns Roverchase. “We were just right at the point where we had these new dogs coming up. And I have seizures myself, so I felt pretty comfortable with what we could do and what our dogs would be able to do.”

Now if Rachel goes into a seizure, Trixie will run to Rachel’s parents to alert them. Then, she’ll run back to Rachel and make sure Rachel lies on her side while seizing.

“Sometimes she can call out, but sometimes she can’t,” Desiree said. “So having Trixie is very important for us because otherwise we can’t leave her in a room alone for five minutes or more.”

Trixie started her training at 4 days old through Roverchase’s Service Dog Training Program. At eight weeks, Trixie moved in with the Smolins and frequently returned to the Roverchase facility in Pelham to continue her training. Trixie and the rest of the service dogs in her litter celebrated the end of their 18-month training at a graduation event in December 2019.

Trixie is now almost 2 years old, and even though she works hard, she can play hard, too. Rachel laughed and said Trixie can be a troublemaker.

“She’ll grab a towel, walk up to you, wait till you notice she has it, and then stare at you,” Rachel said. “The moment you move a muscle, then she runs out of the room.”

As soon as someone puts the service dog vest on Trixie, though, she knows it’s time to work.

“She doesn’t bother you or anything,” Rachel said. “She just walks beside you quietly, and if you let her go to lunch or something, she lays under the table quietly. She knows she’s working now and she can’t goof off.”

“Even in the house, if you put the vest on her and put on the leash, she goes from being a goofball teenager to being serious,” she said.

Since getting Trixie, Rachel has gained a sense of reassurance, she said. And she’s been told that Trixie appears worried when Rachel has a seizure.

“The time before the last time I had a seizure … they called an ambulance, and Trixie seemed concerned and upset about why these people she didn’t know were taking me away,” she said.

Trixie has also helped with Rachel’s emotional health. Rachel had brain surgery in January, and before that, she had to go through an 18-month pre-surgery testing process. Desiree said this was brutal for Rachel.

“She’s gone through a lot,” Desiree said. “Lots of time in hospitals. Lots of time doing tests. Lots of loss of privacy. … Having Trixie has been helpful emotionally, just getting through it all.”

Rachel remembered a time when she was upset, and Trixie followed her into the kitchen.

“Originally, I think she just wanted to go outside, but she noticed I was upset, and she sat down,” Rachel said. “And I just hugged her and sang for a while, and I calmed down.”

Before Rachel’s brain surgery, she was having intense seizures one week apart. Since then, they have become less frequent, but Rachel said it’s too early to tell if this pattern will continue.

As the frequency of seizures decreases, though, Trixie will need frequent at-home training from the Smolins.

“If you play the piano and you don’t play it for six months, you’re going to be rusty when you pick it back up, even though you still know everything,” Witthauer said. “So for Trixie in particular, practicing seizure alert is really important. You’d better practice it, because she’s not rehearsing it as much in real-life scenarios.”

Rachel will fall and simulate a seizure while at home to keep Trixie’s training up to date. Roverchase will also be actively involved with Trixie’s life through her retirement.

“You wouldn’t go up to someone’s wheelchair and be like, ‘Can I touch it?’” Rachel said.

Things like making kissing noises, cooing or even staring and smiling at the dog are inappropriate, Witthauer said.

“If you think about what Trixie needs to do for Rachel, a moment of distraction can be life-altering,” she said.

Not only can these things be a distraction to Trixie, but Desiree also said she and Rachel just want to go about their business.

“This is Rachel’s life, every single day” she said. “You don’t want to think about the fact that you have your service dog with you — you just want to live your life and do the things that other people do.”

Witthauer said she has what she calls the gallon of milk example: Sometimes, she just wants to run into the grocery store, get a gallon of milk, and go home.

Witthauer is the only certified canine behavior consultant in Alabama and one of the most certified dog trainers in the Southeast, according to a Roverchase press release. Even though top service dog organizations have an average waiting list of five years, she said it’s important to be patient and get the right dog.

“My least favorite client interactions are when they’re in here for an interview and they’ve already purchased a dog from a less-reputable source,” she said. “It breaks my heart to see people who are here with a 6-month-old puppy that they’ve spent $15,000 on — this happened just a couple months ago — and the dog didn’t even know how to sit on cue. I couldn’t make her into a service dog. She wasn’t the right candidate.”

Even in the best programs, Witthauer said only about half of the dogs will make good service dog candidates. She said those looking for a service dog should contact a reputable service dog organization before thinking about what kind of dog they want to select.