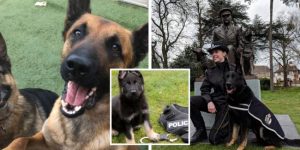 From finding missing people and criminals to sniffing out drugs, cash, firearms and explosives, the canines play a valuable role for the force.

Police dog handler PC Carrie-Ann McNab started a fundraiser to ensure the Scottish police dogs of the past, present and future receive a well-deserved tribute.

Not only would the memorial provide a place for handlers and the public to remember the heroic service of some of the pups, but it would also serve as a testament to their contribution to local communities.

The policewoman hopes to have the memorial built in Pollok Park, which has served as a training centre for the police canines since 1974.

Carrie-Ann has worked as a police officer for 15 years, taking up the role of dog handler for the past six years.

Her partners in service are a four-year-old German Shepherd named Bodie and six-year-old Billy, a Cocker Spaniel who is trained to sniff out drugs.

The policewoman told the Glasgow Times: “I think it is important that there is a memorial for the public to see and understand how much these dogs help out in their local communities.

“Police dogs are about more than just fighting crime, a big part of their job is to find missing people.

“There isn’t a single Police Dog in Scotland that hasn’t returned a missing person to their loved ones.”

She added: “It would be nice for the public to have somewhere to go to reflect on what the dogs have contributed to society during their service.”

The memorial would be modelled on heroic police dog Ziggy, a Belgian Malinois who will be retiring from the force this year.

Similarly to a memorial recently erected in Essex, the UK K9 Memorial, she hopes to have it cast in bronze by famous sculptor John Doubleday.