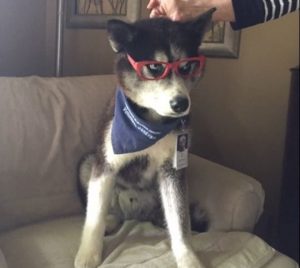 In February, Manitoba lost one of its best-known health-care workers.

Rusty the therapy dog, who put smiles on the faces of countless Manitobans over a decade of service at Winnipeg’s St. Boniface Hospital, died of cancer at age 17 on Feb. 17.  Despite the emotional task of saying goodbye to such a good boy, Rusty’s owner, George Ames, told 680 CJOB on Friday that he has some good news — news Rusty himself would approve of.

“Rusty has a new friend, a dog in training to try to fill Rusty’s shoes, and his name is Hero,” said Ames.

“Hero was born on Remembrance Day, hence his name, and he’s a wonderful four-year-old husky who has a demeanour that’s very rare among huskies.”

Ames said he didn’t want to buy a new dog that could have potentially come from a puppy mill, so he put an ad out on Kijiji for a dog with the right personality — one that he could check the background of.

After “all kinds of very nice offers,” Ames said he heard from a Selkirk, Man., woman with a small, certified breeding program for Siberian huskies.

Hero was her personal pet.

“When she read the ad, some compassion came from her soul and she said, ‘I have the dog for George to help others,’ and she gave us Hero,” he said.

“A lot of people thought Rusty was one in a million, and maybe he was. And maybe Hero is one in a thousand at the beginning of his career.

“He just came out of the womb a happy guy, I believe, and he is going to be special, let me tell you that.

Ames said he initially struggled with the idea of replacing his longtime companion, but with the growing acceptance of therapy dogs by both the public and institutions, he knew Rusty’s legacy had to go forward.