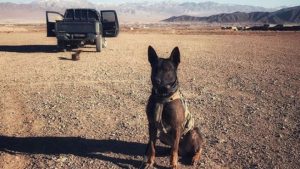 During a raid, the Belgian Malinois named Kuno tackled a gunman and was hit by bullets in both back legs.

After losing one of his paws as a result, he became the first UK military dog to get custom-made prosthetics.

The four-year-old will receive the Dickin Medal from vet charity the PDSA.

Now retired and rehomed, Kuno – who was trained to detect explosives, weapons and incapacitate enemies – will be awarded the medal for valour at a virtual ceremony in November.

Kuno and his handler had been deployed to support elite Special Boat Service (SBS) forces during a night raid targeting al-Qaeda extremists in Afghanistan last year when they came under attack.

The forces, pinned down by grenade and machine-gun fire from an insurgent, were unable to advance.

Kuno was sent in to break the deadlock. Without hesitation, he charged through a hail of bullets while wearing night vision goggles to tackle the gunman, wrestling him to the ground and halting his attack.

Kuno ultimately changed the course of the mission and helped the forces successfully complete it.

But during the assault he was shot in both his hind legs and was treated by his handler and medics in a back of a helicopter as they made their way to safety.

He suffered severe injuries – including a bullet narrowly missing a main artery – and needed several life-saving operations before he could be flown back to the UK for further treatment.

Vets had to amputate part of one of his rear paws to prevent a life-threatening infection taking hold.

After returning to the UK on an RAF plane, he underwent extensive reconstructive surgery.

Just like injured soldiers, Kuno began a lengthy rehabilitation programme to restore function to his nerves and muscles, and is said to have particularly enjoyed his sessions on the hydrotherapy treadmill.

Within months, he was fitted with a custom-made prosthesis to replace his missing paw and an orthotic brace to help his injured limb.

Kuno, who was on his second deployment when he was injured, is the first UK military dog to be fitted with such devices, which allow him to run and jump unencumbered – giving him many more happy years in retirement.

Defence Secretary Ben Wallace said: “Without Kuno, the course of this operation could have been very different, and it’s clear he saved the lives of British personnel that day.

“This particular raid was one of the most significant achievements against al Qaeda in several years.

“Kuno’s story reminds us not only of the dedicated service of our soldiers and military dogs, but also the great care that the UK Armed Forces provide to the animals that serve alongside them.”

PDSA director general Jan McLoughlin said Kuno’s “bravery and devotion to duty” made him a “thoroughly deserving” recipient of the Dickin Medal.

The prestigious award was first introduced by the charity’s founder, Maria Dickin CBE, in 1943. It is the highest award any animal can achieve while serving in military conflict.