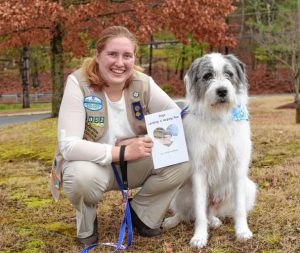 A Girl Scout project that calls for making a lasting improvement to the community has generated a young local author and an educational children’s book that she hopes will pass on some of what she has learned.

Catherine Bezio, a high school senior who lives in Erving, has been training service dogs since she was in eighth grade. She has volunteered for the local organization Heroes, Horses and Hounds, and J.M. Animal Training and Rescue, which both train rescue dogs to become service dogs.

Bezio has trained several dogs since then. Some of the dogs she has trained now work with people with unique needs, including a veteran with PTSD. Another dog, which liked people too much to ever work as a service dog, was adopted by Bezio.

At the beginning of 2020, Bezio was up for her Gold Award — the highest award in Girl Scouts. Thinking of a concept for a project, she naturally gravitated toward her work with dogs. For her Silver Award, she had documented her training of a dog.

But the Gold Award has different requirements than the Silver Award: it emphasizes finding a lasting way to address some shortcoming or need in your community, Bezio said.

While training dogs, Bezio noticed that other people often don’t know how to respond to seeing a service dog. Many people may not know, for example, not to pet a service dog who is working.

“I have seen firsthand how little people know about them. People will come up and try to pet the dogs,” Bezio said. “They just don’t know how to respond to them.”

A book, she realized, could be the perfect way to tie the different pieces together. It would be a medium for sharing her knowledge; and, since a book can outlast its author, its impact might even continue into future generations.

Starting work on the book at the beginning of 2020, she envisioned it as an illustrated children’s book that would somehow incorporate elements of the local community.

The book, titled “Dogs — Lending a Helping Paw,” would cover service dogs, therapy dogs and comfort dogs, and explain the differences between each.

She had planned to write it in March. When the pandemic arrived, the book became a priority for her.

“I found myself with an abundance of free time. I could put a lot of effort into putting the book together,” she said.

For illustrations, she contacted local organizations like the ones she had volunteered for, requesting donations of photos. Using image editing software, she made the photos look like hand-drawn illustrations.

“I thought that would add a nice personalized touch to what the dogs do,” she said.

By midsummer, she had finished the book, including having the book reviewed for accuracy by her mentors in dog training.

She found a publishing arrangement to print individual copies of the book and sell them on Amazon. It is still available to buy.

She also bought about 15 copies of her own book and donated them to local elementary schools and libraries, including Erving Public Library and Ja’Duke preschool.

In the plan she had laid out at the beginning of the year, Bezio would have visited local elementary schools to present her book and talk about it with students. But because of the pandemic, those visits had to be canceled. Instead, she held a few virtual readings online and found other ways to publicize the book.

Now, Bezio is preparing a report of her project, which will be considered in determining whether she will be awarded the Gold Award.