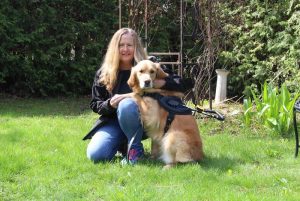 Imagine walking into a restaurant and being told, “You can’t come in,” or being stranded at an airport because none of the taxis will take you home, or making a room reservation, only to have it cancelled by the hotel because you’re not welcome.

This has been my reality for 30 years. You’d think I’d get used to it, but every time it happens, I’m no less shocked than I was the first time it happened.

It’s humiliating and degrading. It’s my right to be accompanied by a guide dog because my dog is my mobility aid. It’s no different than refusing someone with a wheelchair — or because of their religious beliefs, ethnicity or sexual orientation.

It’s discriminatory and it violates my human rights. Many people don’t realize that it’s not only rude, but it’s illegal to deny access or refuse service to a person who’s working with a guide dog in Canada. Yet, it happens every day.

In all provinces and territories, legislation prohibits discriminating against a person with a disability who’s working with a service animal. Discrimination includes denial of access to any premises to which the public would normally have access. So, if it’s against the law, why does it keep happening?

Like so many other forms of discrimination, it’s deeply rooted in ignorance. In many cases, businesses don’t realize they’re breaking the law by denying access or refusing service to a guide dog team.

Penalties under human rights legislation in Canada range from $100 to $10,000.

But there’s more to it. Business owners need to know the laws and educate their employees. They need to understand that there’s only one circumstance when it’s legal to ask a person accompanied by a guide dog to leave their premises, which is when the guide dog’s behaviour is inappropriate and out of control, like barking after being told not to or jumping up. And, although it’s not illegal, it’s unacceptable to ask for proof that a dog is a guide dog, unless it’s behaving inappropriately.

It’s best practice to assume the dog is a qualified guide dog with an important job to do if it is wearing a harness with a handle.

We live in a fast-moving, ever-progressing world. At a time when communities are focusing on accessibility and inclusion — and smashing the barriers that stand in the way of Canadians with disabilities — now is the time for businesses to step up and do their part. You can do your part, too.

If you see discrimination against a guide dog team, speak up and offer your support to the person who is blind or partially sighted. They may not know what’s happening around them — and providing visual information such as the taxi number or other visual cues will go a long way towards helping guide dog handlers to self-advocate.