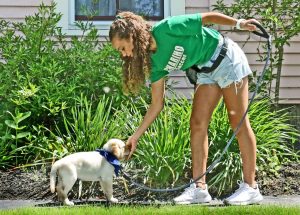 Citron (the French word for lemon) is a yellow Labrador retriever who, if she makes it through the tests and training, will eventually become a guide dog for the New York-based nonprofit group Guiding Eyes for the Blind.

Regional Manager Maureen Hollis said only about half the puppies who start the training end up as guide dogs. The others are trained for other work or adopted as companion animals by families.

“It’s about 50% of the dogs we put on program,” she said. “In our organization, we have 450 dogs on program and we are usually placing about 165 a year with graduates [blind or visually impaired people].”

Citron arrived at the Macaruso home on May 28. Gabrielle, who has never had a dog, has gone through a five-hour orientation and attends weekly virtual training sessions with Hollis. She has volunteered to raise Citron for 6 weeks, after which the puppy will move to the next stage of her training.

Citron’s training currently consists of basic obedience, house manners and house training, and socialization. Macaruso brings the puppy to as many different types of environments as possible so she can be confident in any situation — an essential quality in a guide dog.

“A really important quality is the confidence,” Hollis said. “Resilience, obviously, is a huge one, so if the dog is in situations that are stressful, just like us, can they come back from a stressful day and go to work the next day?”

Gabrielle’s mother, Lisa, is the assistant director of disability services for students at the University of Rhode Island and a member of the Chariho School Committee. She is also familiar with the URI Puppy Raisers’ Club, one of whose members will take over Citron’s training when she leaves the Macaruso home.

“Because these students at the University of Rhode Island formulated a puppy raisers’ club with Guiding Eyes for the Blind, I’ve had exposure to the program from work,” she said.

The puppy’s training regimen, she explained, is highly structured.

“There’s a protocol for everything for Guiding Eyes for the Blind, so she has a schedule,” she said, referring to the puppy. “She has a cue word that Brie [Gabrielle] has to train her to respond to, because ultimately, the individual who is visually impaired will need the animal to eliminate on a very tight schedule and on command. And so, part of the work that Brie is doing is teaching her to “get busy,” which is to eliminate on demand, but of course, she’s just a few weeks old. That’s one of the end goals for the summer.”

Gabrielle said the training has been going well so far.

“For the most part, she’s been doing really well,” she said. “She’s a really smart dog, so she picks it up quickly. We walk her maybe twice a day and then she loves to play outside and roll around in the grass.”

When Citron has completed her training with Gabrielle, she will live with a member of the Puppy Raisers’ Club, where she will receive more advanced training. Gabrielle will still be able to visit Citron, however, because she will be occasionally asked to puppy-sit.

Guiding Eyes for the Blind selects puppies from lines of dogs bred as guide dogs at its Canine Development Center in Patterson, N.Y.

Lisa said, “These dogs, they’re bred to have characteristic traits that make them ideal service animals, and it’s so evident with this puppy. She’s so attentive to Gabrielle.”

She may be just a few weeks old, but Citron has made a big difference to Gabrielle during a stressful and uncertain time.

“Citron gives me someone to be with and she also gives me something to do all day, because school is very easy now that it’s virtual learning,” she said. “She’s a project that I can work on and that will reward me … I miss school and I miss my friends, and raising this puppy while also helping the organization also provides me with some companionship and purpose.”

Asked if she and the puppy had bonded, Brie replied, “Yes, I really love her.”

The next stage of the relationship may be the most difficult, because it will require Gabrielle to let go.

“It will be difficult to give Citron up, but I know she’s going to go on to do important work,” she said.