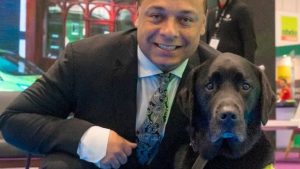 The 28-year-old businessman from Cardiff, who is blind, claims Uber drivers have left him standing when they see his dog.

He says it is “horrible discrimination” and plans to mount a legal challenge against the firm.

Uber said: “It is totally unacceptable for drivers to refuse to take a guide dog and we investigate every report.”

Mr Williams’ and other taxi passengers’ experiences are due to be highlighted on BBC programme Rip Off Britain on Tuesday.

He says he has taken to speaking to drivers when booking a cab so they know he has the black Labrador retriever travelling with him.

However, he says he often has to try several before he finds a driver who will take him and his dog.

Sometimes cabbies drive off when they see his dog, while others tell him they are allergic to dog hair and refuse to carry the pair.

He has been able to see when drivers leave him standing and he says he has a copy of the unfulfilled bookings recorded in his Uber account.

“It makes you feel like a second-class citizen,” he says.

“It shouldn’t be happening in the 21st Century.”

He likes Uber’s app because he can book and pay for a taxi in one go when he is travelling around the UK.

His firm helps companies to be more inclusive and accessible to people with a visual impairment.

Mr Williams has now taken to trying to book a taxi about an hour before he needs it due to the problems he encounters.

“I’ve been late a number of times,” he says.

He believes drivers turn him away because they are concerned about getting dog hair in their vehicles, although some may have a genuine allergy.

The Royal National Institute of Blind People has published its own guidance about how people can challenge discrimination by taxi drivers via a local authority.

Mr Williams and his lawyer Chris Fry told BBC Radio 4 programme In Touch they were taking legal action against Uber under the Equality Act because the issue was happening frequently.

But they are first awaiting a Supreme Court decision following a separate legal hearing that will decide whether Uber drivers are employees as it will affect how their case will proceed.

Uber told In Touch: “It is totally unacceptable for drivers to refuse to take a guide dog and we investigate every report.

“We highlight this obligation to all drivers before they start using the Uber app and often send reminders.

“Any driver who’s found to have refused to take a service animal will permanently lose access to the app.”