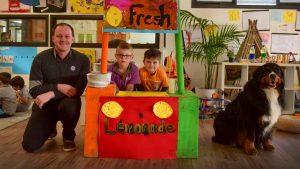 Families at Goodstart Early Learning Morwell Central are greeted everyday with “50 kilograms of love and fluff”.

Lilly, the three-year-old Bernese mountain dog works fulltime at the centre providing a range of services to children and staff.

She is the first Certified Therapy Dog to work full-time in an early learning centre in the country.

“We got Lilly as a puppy and the plan was for her to be a therapy dog even before we got her. We researched the best breeds for therapy dogs in the world and it turns out that the Bernese mountain dogs were number one,” he said.

“They are not very well used in Australia because their life expectancy is not as high, they are quite expensive and the wait list for them is huge.”

Lilly undertook temperament training until she turned one and in October 2018 passed her formal training with Lead the Way Training Institute in Melbourne.

She worked alongside Mr Brown at another Goodstart centre in Traralgon before moving to Morwell when the Morwell Central site was completed in February of this year.

“Lilly’s job is really to go around and in essence to give love and be loved,” Mr Brown said.

“Dogs are very forgiving … if a child is escalating Lilly will sense that very quickly and just walk away, the children then want Lilly to come back to them and have to figure out what they need to do, it teaches them to self-regulate then Lilly will return.

“She supports children because she is very low skilled she isn’t able to draw, cut or build so it makes the children more comfortable trying those activities with no judgement.”

Mr Brown said Lilly also helped the children test their new ideas and the gentle giant worked at a lemonade stand the children designed earlier in the week.

“Having a therapy dog becomes such a core feature to what your centre is, we have families coming in earlier to engage with Lilly and she becomes that connection for them to the centre.”

Mr Brown said Lilly also supports the staff when they are feeling anxious or overwhelmed.

“A therapy dog hold the same certificate as the person who is handling her, she works therapeutically. Lilly is able to offer animal assisted education which is quite special,” he said.

“She is something really special.”