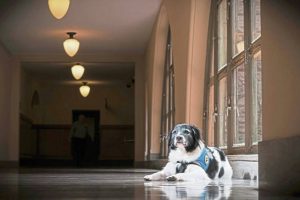 When Grace Coleman began bringing her dog Penny to her office, she hoped it would help brighten her co-workers’ days.

She never expected the spaniel mix, adopted from Action for Animals in Latrobe, to become one of the most effective employees at Crisis Center North, which works with domestic violence victims in the North Hills.

“We ran into a little boy outside the center who didn’t want to go into counseling that day,” said Coleman, the center’s executive director. “But he did want to play with Penny. I just decided to say, ‘How about you give your appointment to Penny?’ The counselor came out afterward and said they’d covered more ground during that one session than they had in six months.”

The boy told his story to Penny, Coleman said.

“The counselor told me, ‘You need to do something with this dog,’ ” she said.

Penny is now winding down her career as a canine court advocate, providing comfort and support to Crisis Center North clients both in the office and in the courtroom, and she has been nominated for a 2020 American Humane Hero Dog Award.

She is certified as a Canine Good Citizen by the American Kennel Club and as a therapy dog since 2010. She is the cornerstone of Crisis Center North’s Paws for Empowerment program.

In 2013, the Allegheny County District Attorney’s Office supported the creation of the Victim Assistance Canine Program, and Penny became the first shelter dog in the state to provide canine advocacy services in court, piloting the program at District Judge Anthony Saveikis’s Oakdale courtroom.

Coleman said she can’t thank the DA’s office enough for taking a chance on Penny.

“She really opened up the doors in Allegheny County,” Coleman said. “And the DA was the first one to take a chance and help fund it and say, ‘I think you have a good idea here.’ ”

“It takes about two years to train dogs to do this, but so many of the things she does, we didn’t even teach her,” she said. “We came into the office with one new client, and when Penny walked into the room and saw her, she just seemed to know that she had to make herself small and be as gentle as possible.”

Penny dropped to her stomach and did a sort of military crawl across the floor to the woman.

“The client got right down on the floor, started petting her and crying, and the therapy session began right there in the hallway,” Coleman said.

At 12 years old, Penny is nearing retirement and, while Coleman has begun minimizing her hours, she also brought a new canine advocate on board: Ari, an Australian shepherd mix.

Coleman is excited to continue the work she began with Penny.

“The human-animal bond is really amazing, and I feel privileged to be able to watch it happen all the time,” she said.