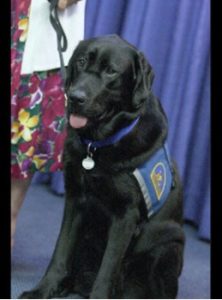 STATEN ISLAND, N.Y. — A former comfort-dog handler for the Staten Island district attorney’s office who maintained he wasn’t paid for the time he spent caring for the pooch off-hours has settled his lawsuit with the city and the D.A.’s office for more than $113,000, court records show.

Kevin Ivany, who worked as a detective investigator, had sued the city and D.A.’s office in Brooklyn federal court in July 2018. Ivany contended he was stiffed on overtime hours he put in daily, weekends and holidays as a handler.

Settlement papers state the agreement is not an admission of liability by the defendants.

Ivany, 55, was employed by prosecutors as a senior detective investigator from February 2008 to December 2017, said his civil complaint.

Starting in May 2012, while the office’s DNA Program coordinator, he was assigned the additional duties of a comfort dog handler, his complaint said.

Victim advocate Mary Santamorita was the other handler of the canine, named Bronksey.

A black labrador/golden retriever mix, Bronskey was donated to the office under former District Attorney Daniel Donovan by the nonprofit Canine Companions for Independence in the spring of 2012.

A tail-wagging bundle of love, Bronksey was a welcome sight around the Island, cheering up kids at Family Court, comforting domestic-violence victims, and making the rounds at local schools to teach youngsters about animal care and wellness.

Bronskey was retired in December 2017 at the age of 7, considered typical for service dogs of his breed and position, McMahon said then.

He had previously undergone surgery to remove several growths.

According to Ivany’s complaint, his day didn’t start at 9 a.m. and end at 5 p.m.

Ivany exercised, groomed, walked and fed the pooch before and after work, said his complaint.

Bronksey stayed at Ivany’s home because the D.A.’s office couldn’t house him.

All that time added up, Ivany contended.

In addition to his normal work hours, he typically spent 20 hours a week traveling to and from the job with Bronksey and 25 hours a week (including weekends) walking and grooming the canine, the complaint alleged.

McMahon told the Advance then the course is standard for comfort dogs like Bronksey after they’ve been in the program for four or five years.

He said the animal had been lethargic and needed to shed some extra canine calories before the retraining.

In approving the settlement, District Judge William F. Kuntz II said it “reflects a fair, reasonable, and appropriate compromise deemed in the best interest of the parties, and is in accordance with law.”

The city Law Department did not immediately respond to emails seeking comment.