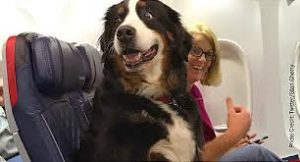 People who fly with their pet because they need them for comfort will notice some changes are coming to airlines.

The new airline rules essentially ban emotional support animals, many of which people said could help with an emotional medical condition such as anxiety or panic attacks.

Travelers had to register pets online and have a doctor’s note. Now, it’s no longer allowed.

Airlines in the U.S. are banning emotional support animals from riding in the cabin. Animals such as dogs, turtles, pigs, snakes and turkeys were allowed.

“There’s too many people that used it and didn’t need it and hurts the people who really need it,” said Lu Picard, East Coast Assistance Dogs.

The new rule, which starts in 30 days, will only allow service dogs on commercial flights in the cabin.

All others will have to be checked into the cargo hold for a fee.

Service dogs are trained to perform work for a person with a disability. Like open a door.

The decision by the Department of Transportation was made because of issues on flights by “unusual species of animals.”

It said there was an increase in the number of passengers “fraudulently representing their pets as service animals.”

“I have seen dogs waiting to get on a plane that were nervous, barking, growling, and not acclimated enough to feel comfortable there and that’s why the DOT did what they did,” Picard said.

Picard said she hopes more people will now recognize the service dog industry as a profession.

“This dog has to be at a certain level at a certain task-wise, personality-wise, temperament-wise, before it can be a service dog and it will help validate us,” she explained.

If a support dog performs tasks to help emotionally, it could be considered a service dog. That person would need to get the dog certified.