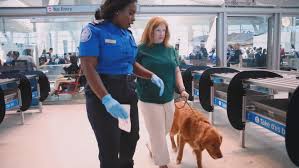 The U.S. Department of Transportation is cracking down on passengers flying with animals.

No longer will emotional support animals be considered service animals. A service animal is defined only as “a dog that is individually trained to do work or perform tasks for the benefit of a person with a disability.”

That means “emotional support” peacocks, pigs and horses will no longer be able to fly.

For Kelly Rosequist and many in the service dog community, the new restrictions come as a welcome change.

Rosequist has been working with her 6-year-old Golden Retriever, Arrow, for five years. He provides pulmonary support.

“He is trained to detect an asthma attack prior to it happening, alert me that it’s going to happen, and bring me my medication,” Rosequist said.

Arrow can also open the fridge on command to retrieve juice for Rosequist, who often deals with hypoglycemia. Rosequist flies with Arrow several times a year.

“It’s not easy is because of other people or other dogs,” she said.

While her dog is well trained, she almost always encounters problems with other people’s pets.

“There was an emotional support animal sitting across the aisle from us that barked at Arrow for the entire three-hour flight,” she said.

The distractions from un-trained pets don’t allow Arrow to focus on Rosequist’s needs.

“He’s been attacked by another service dog in an airport,” she said.

So, when she heard of the new restrictions, Rosequist was relieved. “We are excited that there are more laws and regulations to protect legitimate service dogs,” Jenny Castro-Conde said. She works with Rosequist at Dog Training Elite and has her own service dog, Duke. The new regulations, Castro-Conde said, will weed out those bringing fake emotional support animals who are untrained on flights.

Both women agree it will allow their dogs and other legitimate service dogs to do their jobs without distraction.