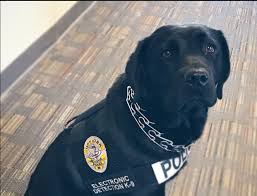 Police in Nebraska have recruited a highly trained dog to assist them in the fight against cyber crime.

Unlike most sniffer dogs, who are taught to detect drugs, Officer Quinn has been specially trained to sniff out a particular chemical used in electronic devices like SIM cards, cell phones, and micro SD cards.

“We’ve had a couple of cases where I believe we as law enforcement officers may have missed something. A dog who can pick up an odor would be able to say ‘hey, there’s something here. You need to look here.'”

Following a two-week familiarization period in Indianapolis, Indiana, Howell has been working with the highly trained Quinn since November 3. The detective has great expectations regarding the contribution Quinn will make to local law enforcement.

“After a night with her I thought ‘this dog’s unbelievable,'” said Howell. “I want to get her to be that dog that can find something 18 inches under a wall or 18 inches underwater, or something behind a wall, or under the carpet. I’m hoping that she will make a big difference in the state.”

When she isn’t nosing out electronic storage devices crammed with incriminating evidence and all manner of illegal content, Officer Quinn may be called on to use her affectionate nature to offer emotional support.

“She’s a very friendly dog. She gets along around other people very well,” said Howell. “If we go inside a house and there are families and kids that are upset, we can take her to the kids and they can pet her, which will calm them down.”

Quinn is the thirtieth electronic storage device K-9 officer to find employment in the United States. A position was found for her on the Bellevue force as the result of an anonymous donation, which was made through the Bellevue Public Safety Foundation.

Another electronic storage device K-9 officer named Bear, who was trained at the same facility that put Quinn through her paces, was used in the investigation into ex-Subway spokesman, Jared Fogle.

Bear, who is also a Labrador, found a thumb drive that authorities were unable to locate during an FBI raid at Fogle’s Indiana home in 2015. The drive subsequently played a key role in Fogle’s arrest.