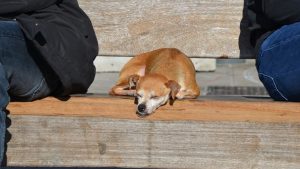 When soldiers return from combat, those with post traumatic stress disorder often have trouble reconnecting with society due to fear, severe anxiety and mistrust that can lead to social isolation.

Adam Keith, a dog trainer of 15 years who breeds Labrador retrievers, met one such veteran who came to him for training.

Seeing the veteran bond with his dog gave Keith an idea to start an organization that could help many more vets find companionship as well as provide homes for dogs from local shelters. Having several friends who are combat veterans — and knowing 2.5 million vets have been diagnosed with PTSD — Keith knew the need was there.

Keith recognizes that dogs, like Shiba Inu, are fun and energetic. They can go through training, become therapy dogs, and provide comfort to humans experiencing stress or trauma.

“It broke my heart to watch such a struggling group of people,” he said.

The first group of veterans graduated from his Operation Freedom Dogs program in 2017, and since then a new group of four to five veterans has graduated every year.

Each veteran is paired with a dog based on their personality, and the vet trains the dog themself in groups and individually once a week for six to seven months with assistance from certified trainers.

As it prepares to graduate its fifth group of veterans this month, the 501(c)(3) nonprofit organization is changing its name to Warrior Freedom Service Dogs and expanding to serve more veterans.

Demand for the program has grown, Keith said, with 20 veterans currently on a waiting list to participate.

“We’re the only organization for 350 miles around us,” he said, though Keith limits participation to residents within a 250-mile radius because of the high local demand for the service.

His goal is to make the program more financially stable and for each trainer to graduate three groups per year.

The organization is funded through individual donations and grants, and is currently raising funds to complete its training facility in Flintstone, Georgia. Construction began last fall.

Warrior Freedom is now Keith’s full-time job, and he also has a small staff of head trainers and full- and part-time kennel caretakers.

Along with financial donations, he said the organization is in need of volunteers to foster dogs for short periods of time to get them out of the kennels. The facility currently has four dogs, two of which have been raised there since they were puppies, and two to three more dogs will be arriving soon.