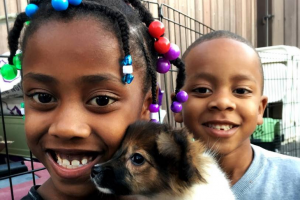 PetSmart Charities has renewed its support of Family Promise with a grant for $25,000. The grant will be used to continue the operations of the Pets with a Promise Program, which operates at Family Promise Affiliates across the United States.

Pets with a Promise began in 2015 when Family Promise realized that families experiencing homelessness were often being forced to make the decision between seeking shelter and keeping a beloved pet. The program provides sheltering services for pets in Affiliate run kennels or other local facilities, so that families can keep their pets while they stay with Family Promise and work to achieve sustainable independent housing.

“At PetSmart Charities, we believe in the importance of preserving the bond between pets and people, no matter what life challenges or circumstances pet parents may be facing,” said Kelly Balthazor, regional relationship at national charity. “We’re proud to once again support Family Promise in providing resources to keep more pets and people together in communities across the nation.”

“During this unprecedented COVID-19 pandemic, more families than ever are at-risk of losing their home and their sense of normalcy,” said Claas Ehlers, Chief Executive Officer of Family Promise. “Pets are an important part of a family and provide comfort during difficult times. This grant from PetSmart Charities and the continuation of the Pets with a Promise program, will ensure that more families and their pets receive the support they need until they can achieve sustainable independence.” Family Promise has Affiliates in over 200 communities across the United States which provide prevention, shelter, and stabilization services to families at-risk of and experiencing homelessness. Traditionally, Family Promise Affiliates have operated shelters in community spaces and congregations, but the COVID-19 pandemic has prompted them to find creative ways to continue serving families while ensuring safety.

Little did she and her family know how important their new puppy, Roxie, would become to them when they brought her home three years ago.

There was an immediate connection between Tasha, who suffered from periodic seizures, and the new dog. Roxie stuck close to her human “sister,” even sleeping at the foot of her bed. But no one realized how special their bond was until Roxie witnessed one of Tasha’s seizures.

“Roxie found me and grabbed at me, leading me to Tasha,” recalls Tasha’s mom, Laurie. “Thankfully, I got to her in time.”

From then on, dog and daughter were inseparable, Laurie says.

“Roxie’s my emotional support animal,” Tasha explains. “Whenever I’m about to have a seizure, she finds my mom, whines, and makes her come check on me.”

When the family lost their home and came to Family Promise-Salt Lake, Utah, they worried what would become of Roxie since most agencies barred pets. But Family Promise was able to keep human and canine members of the family together through Pets with a Promise.

“Because Roxie’s expenses were covered, a volunteer offered to board her. The family visited as often as they wanted,” says Family Promise Program Manager, Alyssa York.

For the three months the family was in the emergency shelter program, Roxie had a safe, comfortable home. And although she wasn’t around daily to keep a close eye on Tasha, Roxie enjoyed frequent visits from her family.

The family is now in transitional housing, and Roxie is back at the foot of Tasha’s bed each night.

Since Roxie, the Affiliate has lodged one cat and expects to serve many more families and their pets. York is thrilled about this opportunity.

“Now families don’t have added worries about their pets when they’re in a crisis,” she says. “I love that we don’t have to turn anyone away.” Family Promise envisions a nation in which every family has a home, a livelihood, and the chance to build a better future. What began as a local initiative in Summit, NJ, has become a national movement that involves 200,000 volunteers and served more than 111,000 family members in 2019. Family Promise will change the future for 1 million children by 2030.