Family Gets Reunited With Service Dog 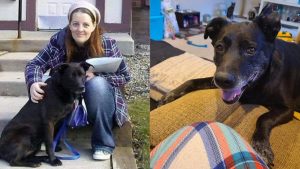 A Michigan couple was reunited with their rescue service dog after spending three years looking for the dog in an emotional reunion made possible just in time for Christmas. The black Labrador retriever mix named Lola, or as Steve and Debra Mejeur affectionally refer to her, Lola Pup or Poo Butt, is home and the timing couldn’t be more perfect.

“Are you ready for this?” Debra said to Inside Edition Digital before sharing Saturday was her birthday. “So yeah, I got an early birthday present, slash Christmas present.”

Debra recalled the day her dog had gone missing. It was in October 2017, when Debra and Lola were visiting friends in Elk Grove Village, Illinois for the day that Lola managed to escape the fenced-in yard she had been in. After she disappeared, they searched almost every weekend over the course of 16 months hoping to find her, traveling from their home in Kalamazoo to Illinois.

But Lola had vanished without a trace.

“I cried all the way home and a few days after because it felt like I abandoned her. There was so much guilt. I felt like I didn’t do enough to keep her safe,” she said.

Debra said she spent endless hours joining different Facebook groups and shelters in the search for her missing dog. She said she even joined the Greenbay Packers fan club page, hoping maybe someone would know something.

For Debra, Lola just wasn’t a family member, but was also her lifeline; her personal service dog that she said she trained herself, that knew how to help her when she had a seizure.

“When I have grand mal seizures, I wake up confused. Lola would lay next to me until I came to,” she explained.  “It was always such a comfort.”

After more than a year-and-a-half of trying to find Lola, Debra decided it was time to move on and they ended up adopting a dog they named Maddox, a black Labrador mix that just happened to be the same breed and color as Lola.

“He was labeled unadoptable. He was sick with heartworm. We didn’t care that he had heartworm. This felt right for us. We would take care of him,” said Debra. “Part of me felt like it was a sign not to let another dog die when it could have been saved. Maybe Lola was telling us to get him.”

Then, on Dec. 3, the phone rang. Debra answered and on the other end of the line, a computerized voice from a shelter told her Lola had been found. “I was stunned,” said Debra. “I kept on saying my husband’s name over and over. It didn’t seem real to me.”

She and her husband hugged, overjoyed by the news, and they went to the Illinois shelter that they soon learned had only been 10 miles away from where they visited friends in Illinois.

Debra soon learned Lola’s story of survival. She had been living in the woods for the last three years, and a retired couple had been looking after her, feeding her and giving her water for the last two-and-a-half years. Each time the couple tried to bring her inside their home, Lola would runaway. At one point, a neighbor called animal control, hoping they’d be able to get Lola on a leash, but they were unable to catch her, Debra said.

“We had the polar vortex last year when it was negative 30 and Lola was living in the woods and she survived it,” Debra said. “People can’t even do that.”

Finally, the couple earned Lola’s trust enough that they were able to finally put her on a leash. They drove her to the Dupage County Animal Shelter, where Lola’s microchip was discovered, and Debra and Steven were contacted. Debra and Steven were reunited with their little girl two days after Lola arrived at the shelter.

Debra recalled how overwhelmed she was with emotion. She said at first, Lola appeared hesitant, but once she called her by her nicknames, “Lola Pup” and “Poo Butt,” Lola began to slowly creep towards her. After a few sniffs and licks, she realized it was her mom.

“She burrowed into me smiling and running around me,” said Debra, whose husband was thrilled to see the pup, too, and was busy filming the long-awaited reunion.

Debra said the first thing Lola did once she was got home was drink and make up for lost time.

“She ran right to the water holder and drank about a gallon of water at one time, then we cuddled. It’s unbelievable. I’m still reeling from this,” said Debra, who said Lola had to get two of her teeth removed and was also being treated for Lyme disease.

Debra hasn’t yet met the people who helped care for Lola, but hopes to one day soon. In the meantime, she’ll be sending them lots of photos of Lola. “They are part of our family now,” said Debra.