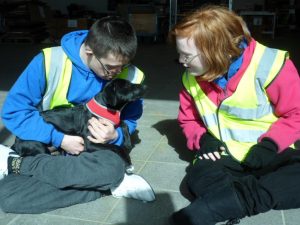 AN ADORABLE new arrival has lifted the spirits of a Swindon charity’s clients.

Phoenix Enterprises service users warmly welcomed their new therapy dog Milo to the team and enjoyed having him run and play around their new Elgin Industrial Estate home.

The five-month-old Labrador/Spanish water dog cross has been adopted by the charity to support people with conditions like autism.

Though not yet old enough to start training, his energy and enthusiasm has already improved the wellbeing of everyone around him.

One service user said: “He brings joy, he’s so cute and energetic. He brightens the atmosphere and makes everyone positive.”

Milo starts training at nine months old, which will include being trained to walk on a loose lead, to accept being stroked and handled by strangers, to take treats gently and to respond calmly to sudden noises.

He joins Chuck, a springer spaniel who has worked with Phoenix for a while but does not belong to the charity.

Mike Bowden from Phoenix said: “Many service users at Phoenix live with autism, and research has found that adults with autism experience fewer meltdowns in the presence of a therapy dog.

“Their stress levels are significantly lowered and dogs can make a difference to confidence levels, help reduce anxiety and improve communication.

“Therapy dogs can have a massive impact on their daily lives.

“Of course, therapy dogs are not just of benefit to those with autism.

“As anyone who owns a pet will know, spending time with an animal has a huge impact on a person’s happiness and, research has shown, their health.

“He is particularly popular with students from Horizons College, who do work experience at Phoenix, and his calming effect is very evident.

“He is definitely aware when someone is upset and in need of a cuddle.”