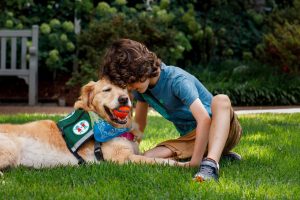 In early March, Everett Gray’s transplanted heart began to fail. A couple months shy of the five-year anniversary of receiving his “miracle heart,” the 8-year-old was admitted to the cardiac I.C.U. at the Children’s Healthcare of Atlanta at Egleston, as his immune system battled with the heart that saved his life as a toddler.

It wasn’t Everett’s first time in the hospital: Born with a rare heart defect called hypoplastic left heart syndrome, he’s been a regular patient from birth. No child enjoys a hospital stay, but Everett, a second-grader who loves dinosaur fossils and Legos, finds his own silver linings in hospital visits, from musicians and bingo games with other kids.

“It’s kind of a coping thing for him,” said his mother, Kelley Gray. “He’ll say, ‘well, at least the kid’s hospital is better than an adult hospital.’” Most grown-up hospitals don’t have clowns roaming the halls.

But when the little boy woke up in recovery in March, there weren’t any clowns. Instead, the whole world had changed, seemingly overnight.

By mid-March, Covid-19 had grown from a threat to a full-blown health care crisis. In response, the hospital enacted strict visitor limitations (one parent per child, no siblings or friends) and suspended nearly all the activities that had once helped make Everett’s hospital stays a little more bearable. No more art cart, no more bingo.

“Things were just being taken away,” said his mother. “But Izzy was still there.”

Izzy is a 70-pound, 10-year-old golden retriever with a blonde coat and ears as soft as velvet. She is one of 15 full-time facility dogs employed by Children’s Healthcare of Atlanta’s Canines For Kids program. And from the beginning of the pandemic, she and six of her canine colleagues have reported for hospital duty as essential workers. For families like the Grays, navigating their own crisis alongside the stress of a deadly pandemic, Izzy and her fellow canines took on hero status in recent months. So called “child life” programs aim to normalize the hospital environment and help kids feel like kids. Covid-19 obliterated most of those activities, but many of the dogs still dutifully clock in to brighten their days.

“Their very presence has normalized things — for everybody, but particularly for young patients,” said Jennifer Arnold, founder and director of Canine Assistants.

The Georgia-based organization has trained and supplied over 80 facility dogs to children’s hospitals around the country. During the pandemic, physical touch is limited, and friendly faces are hidden beneath masks. Hugs are out of the question. “It’s very hard on the kids. But getting to love on the dogs, and even being able to see their faces, is a bigger deal than you might realize,” she said.

As the coronavirus caseload grew to alarming levels, most hospitals suspended programs run by volunteers, including volunteer therapy dog programs. But other institutions, such as Mount Sinai in New York and Cook Children’s Medical Center in Fort Worth, Texas, have in-house dog teams and have kept their pups in service, with measures to limit the spread of coronavirus.

Izzy’s handler, Vandie Enloe, now removes the dog’s vest before visiting a patient and disinfects her coat, paws and new silicone leash more frequently. She also bathes the dog twice a week, instead of just Sundays.

For both parents and their kids, a lengthy hospitalization is tough. “It’s not only the fear of hospitalization, or the illness,” said Diane Rode, director of child life at Mount Sinai’s Kravis Children’s Hospital. “It’s the isolation, it’s the uncertainty.”

But dogs fill in some of those gaps as a much-needed friendly face, calming presence and cuddle buddy. And as the pandemic abruptly changed the hospital experience, a dog like Izzy is an anchor for a kid.

Dogs can also normalize the pandemic. Professor, a goldendoodle and the most senior member of Mount Sinai’s Paws and Play program, donned a face shield to make the equipment a little less frightening. Moby, another goldendoodle in the crew, conducted a live tour of Mount Sinai’s Central Park field hospital, to alleviate the fears of kids who could see it from their rooms.

For medically fragile patients who couldn’t leave their rooms or meet the dogs in person, virtual doggie visits came by way of digital tablets connected to robots on wheels. During these sessions, patients are just happy to watch Professor chase a tennis ball, according to Morgan Stojanowski, assistant director of the child life department at Kravis Children’s. “Kids just wanted to be reminded that their relationship was still there.”

In Atlanta, that relationship became a crucial part of Everett’s clinical recovery, which looked dramatically different without art therapy and game nights. “But we were so lucky that Izzy was considered essential,” Kelley Gray said. “Because to Everett, Izzy is essential.”

In the hospital’s family library, Everett would lay on the floor with Izzy, stroke her fur, talk to her and even read to her. The curly-haired second-grader especially liked Izzy’s gentle, insistent pawing whenever he stopped petting her. “He feels like Izzy is his best friend at the hospital, and that she loves him the most, he must be her favorite boy,” his mother said. And it’s not just kids. Klein said that the hospital’s dogs have played an important role for parents too. “A parent in the hospital, they don’t have anyone to go to,” she said, adding that dogs are just as happy to comfort adults.

“We had people say, ‘We didn’t know if you’d be here or not,’ because so many things didn’t get to continue,” Enloe said over Zoom with Izzy’s head on her lap. She stopped stroking Izzy’s shoulders for a moment, and the dog issued a lazy reprimand with her paw. “So to be able to do that, and to be here for our families, has been amazing. It’s our honor, and Izzy’s calling.”

After 40 days, Everett left the hospital in April to a different world. His school was closed. His family wasn’t able to celebrate his homecoming as they had before, with a welcome home party or a visit to the dinosaur bones at the natural history museum. And he couldn’t see his friends.

Now, three months after being discharged, Everett is “getting a little stronger every day,” his mother said. Earlier this summer, he even got to play with a few friends in the backyard, wearing masks and staying six feet apart. But in Georgia, Covid-19 has spiked in recent weeks, and the Gray family has become more cautious.

“We’re really nervous,” said Kelley Gray. While the state hasn’t yet decided whether schools will reopen this fall, Everett won’t return to a classroom until a vaccine is available. “We’ve talked about it a little bit, and he didn’t melt down,” she said. “But when it gets to the actual first day of school, if other kids are going back and he’s not, that will be challenging. It’s just the unfairness of it all, which is a theme in his life.”

Everett regularly returns to the hospital for lab work and appointments with specialists and, naturally, visits with Izzy. For Everett, these reunions are a rare bright spot, especially when it seems like everything else — play dates, beach trips, the promise of another first day at school this fall — has been taken away.

In June, one of Everett’s appointments fell on Izzy’s 10th birthday, which the hospital would normally celebrate with a birthday party. Instead, it was a party for two. Everett made a birthday card for her, and Izzy wore a pink chiffon wreath around her neck. And he gave her a big hug when he arrived.