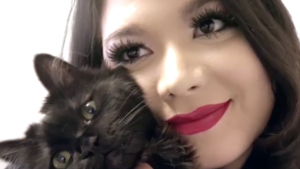 Animals have the ability to transmit peace love and joy into our everyday lives. So, that can be tremendously helpful to those who battle with mental and emotional distress.

According to peer reviewed journal, BMC Psychiatry, emotional support animals help with alleviating worry, they provide comfort and they mitigate against feeling of isolation and loneliness, which can truly improve symptoms of mental health conditions.

We reached out to the program manager of the Idaho Department of Health and Welfare – Behavioral Health Division, Scott Rasmussen, to learn more about emotional support animals or also known as companion animals.

With this letter, a person in-need of an emotional support animal is protected by the federal government to live with and fly with their animal, free of charge. That’s because their mental and/or emotional state is considered a disability.

“We do see people attempt to abuse that, that don’t gain the benefit but still try to claim emotional support animals for secondary gain, such as access to housing,” said Rasmussen.

The law isn’t the only thing that can be abused, if not done correctly, these animals can be misused. Therefore, that’s exactly where animal experts and professionals play a huge role.

“If they care to share it, I think we could do a much better job picking an animal, a pet that would be best fit their scenario,” said the Twin Falls Animal Shelter’s director, Debbie Blackwood. “An animal that tends towards high anxiety themselves, probably doesn’t work really well in calming. I’d match their physical environment, their activity level and their experience.”

Unlike service animals, there is no specific animal or training needed to qualify a pet to become an emotional support animal. The only necessary documentation is the emotional support letter, or the ESA letter. However, these animals must first be healthy, capable and well-tempered to qualify meet the standards of approval. A veterinarian, is the one who determines the animal’s state.

“Our role is to make sure that pet is healthy and that it’s able to handle that role,” explained Dr. Dr. Zsigmond Szanto, who is the owner and medical director of the Twin Falls Veterinary Clinic and Hospital. “It’s also important that these pets are safe to others. We hear stories about an emotional support Pitbull that nipped at a five-year-old child in an airport, or a cat trying to scratch somebody trying to pet the kitty. So, it is stressful for them to be surrounded by unknown people and sometimes it’s overwhelming. “
All in all, there a multitude of layers that factor-in to getting the right emotional support animal, for both the owner and their companion. These animals become a vital part of a person’s journey in improving their mental and emotional state.

“It’s that consistency. They don’t judge you. They accept you and that’s really powerful. Their definitely great, emotional support for all of us,” expressed Blackwood.