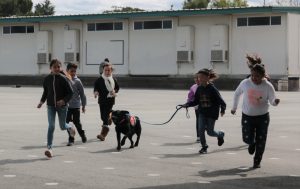 One family’s tragedy turned into a blessing for not only the special needs students at Sunnyslope Elementary School, but for virtually every student fortunate enough to meet Perla, a five-year-old English Labrador retriever. Principal Joe Rivas said the dog’s demeanor and professional training as a service animal can calm any kid down in seconds.

Perla—also known as Perl—spent four years as a companion to Grant Burillo since he was six years old and a student at Escuela Bilingue International in Emeryville. Grant died in a boating accident in September 2019.

Rose Burillo, Grant’s mother, said Perla became stressed when she was no longer working with her son or going to school. Burillo contacted Monkey Tail Ranch, where the dog was born and trained, to determine the best course of action. They decided Perla needed to go back to work.

Since Feb. 27, Perla has been at Sunnyslope Elementary School in Hollister. On March 10, Burillo came to the school to see how Perla was fitting in. As it turned out, Perla has been more than a curiosity to the children; she has been an emotional life saver.

“It was a hard decision to make, as losing Perla was another loss,” Burillo said. “However, being able to see Perla and meet her new owner [Rivas] and her new community was a beautiful moment for me. It is hard to let Perla go, as I have lost so much.”

Burillo spoke of how Perla was able to calm Grant during anxious moments, acting as a buffer in stressful situations.

“Perla also allowed Grant to be more independent and helped him feel safe at night,” she said. “She learned to apply deep pressure on him when he was anxious and could easily redirect him. I know Grant would want Perla to continue to work and to be with other kids. Being able to see firsthand the love Sunnyslope has for Perla confirmed I made the right decision.”

Principal Rivas told BenitoLink that Perla came to his home Jan. 21. Before bringing the dog to campus, Rivas was trained on how to work with her.

“She knows everything,” Rivas said. “I had to be trained on the commands, and we did some testing at Target and some in the neighborhood. And then she came to the campus.”

Rivas described Perla as a “repurposed service dog, who is now an emotional support facilities therapy dog” to help children who have suffered any type of trauma, “or general education kids who are just having a rough day.”

“She knows how to make students feel better,” he said, adding that Perla is so mellow that he’s the one who gets nervous when students rush up and surround her. He said when he brings Perla out to the playground, children beg to walk her.

“She’s trained to go with other students to provide that emotional support,” he said. “She’ll walk with any student at any time.”

When not walking around the playground or being with one of the students during an emotional time, Perla stays in Rivas’ office, where students seemingly just happen to drop in and end up petting her. At home, Rivas said Perla magically transforms.

“She’s a completely different dog,” he said. “When her vest comes off, she’s a dog. She’s a little more excitable, runs in circles.”

While Rivas spoke with BenitoLink, students continually came up to pet Perla and ask if they could walk her. Perla is so popular, she even has her own Instagram account.

“She loves coming to the school,” Rivas said. “On weekends, when we’re home, I believe she misses being here. When I walk her here, she almost dives towards the kids, even if there’s a huge crowd, just to get petted and loved. She lives for this.”

Rivas said that after the boating accident, Burillo returned Perla to Monkey Tail Ranch, where she stayed for a few months. He said she was offered first to the San Benito County Sheriff’s Office and then San Benito High School.

“It sort of trickled down to us, and I asked Hollister School District Superintendent Diego Ochoa and let him know we had this opportunity for a facilities support dog and he said ‘let’s do it,’” Rivas said. “Now she’s working with our students. She’s calm and doing great.”

When Burillo showed up at Sunnyslope Elementary on March 10, it was obvious that Perla remembered her as she ran to see her former owner. It was both a happy and sad reunion.

Burillo and Rivas, along with Tim and Elise Houweling from Monkey Tail Ranch, took Perla to a classroom where many of the students had met the dog before, yet couldn’t resist reaching out to touch her as Burillo led her between their desks.

Tim Houweling told the students that before coming to the school, Perla once helped another little boy named Grant. He told them how Perla went to school with Grant every day.

“Grant’s no longer with us,” he told the class, “but we have Perl here, and she loved kids so much we had to find her another job. We know from Mr. Rivas this is Perl’s favorite thing. Thank you for giving her all the pets she needs, because that’s what she works for, the attention and your love.”