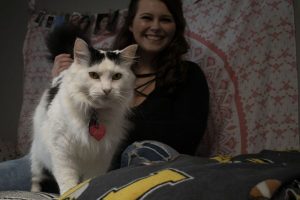 With COVID-19 impacting the University of Iowa campus, classes quickly moving online, and the social scene practically shutting down, mental health has become something numerous students are struggling with. For some students, an emotional support animal keeps them in brighter spirits.

Director of Housing Administration Virginia C. Ibrahim-Olin said there have been no major changes to the process for allowing support animals as a result of COVID-19.

She added that there are currently 17 students that have emotional service animals in the residence halls.

“Service animals are recognized under the Americans with Disability Act (ADA),” Ibrahim-Olin said. “Emotional support animals are not recognized by the ADA and are prescribed by a licensed health care professional.”

She said to have an assistance animal, students have to complete a Request for Reasonable Accommodations to University Housing and Dining which includes approval from their primary health care providers, submit different documentation on the requested animal, and then meet with a University Housing and Dining staff member. Once this is all completed and approved, she said the student will then get an approved date for their animal to enter the building and the residence hall community will be notified. Ibrahim-Olin said that most animals are permitted.

“We currently have 12 cats, one dog, one gecko, two hamsters, and one snake,” she said. “As long as the animal does not pose a direct threat to the health or safety of others or property of the university, it should be allowed.”

UI freshman Montala Carruthers said she had a negative experience with trying to bring her dog as an emotional support animal to campus.

She said she deals with anxiety that is sometimes controllable, but other times not. She had contacted the university for permission to use her mental health counselor as her medical signature, she said, but University Housing and Dining would not allow it since the counselor was not her primary health care provider. Carruthers said she does not have direct access to a primary health care provider because she does not have health insurance, so she asked University Housing and Dining if it was OK if her dog was more like an assistant animal instead of an emotional support animal.

She said University Housing and Dining still denied the dog to live in the residence halls.

“My roommate and I both suffer from anxiety, there is not much that we can do to help each other,” she said. “It is a little hard when I am here by myself, and all of my friends and dog are back home.”

Carruthers added that she is thinking about moving out of the dorms so she could have her dog with her.

UI freshman Colease Sturges said she lives in Burge Residence Hall and has an emotional support animal with her this school year. She suffers from academic-related anxiety and separation anxiety from her cat, Jaxx, who is with her at school.

She said she has found medication unsuccessful with treating her anxiety, so having her cat with her has been the best option.

“It just does not work well, so I use him, and it gets better,” Sturges said.

Sturges said that the process to have her cat as an emotional support animal in the dorms was very involved. She was given rules surrounding caring for her cat, she said, such as it cannot leave her dorm room, when she has to change his litter box, and how to store his food.

“Someone [a staff member] is supposed to come and check on me once a month and have a meeting with my roommate and I to make sure that we are treating him well,” Sturges said.

Her residence hall room has also become quite the hit with other students on her floor, she said, and has had people come and visit to see him.

Overall, Sturges has loved her experience having her cat Jaxx with her.

“He has definitely helped a lot especially with COVID-19 and quarantine,” Sturges said.