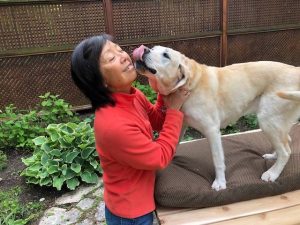 The news came on December 21, the shortest day of what has been the longest year of our lives.

The vet confirmed our worst fears. Our stalwart COVID canine companion, “Tashi,” an 11-year-old yellow lab, has a rare form of cancer, one beyond the abilities of veterinary medicine to cure.

The only good news is that it is of a type that seldom causes pain or undue discomfort — to the dog. We, on hearing this prognosis, felt nothing but pain, discomfort, and profound sadness.

During months of confinement, she has been our lifeline.

We are apparently not alone in this. According to Dr. Megan Mueller, co-director at the Tufts Institute for Human-Animal Interaction, pets provide “nonjudgmental emotional support,” and studies show that “contact with pets help reduces anxiety, particularly when you are experiencing a stressful situation.”

Our stress-reducer, Tashi, came into my life as a surprise.

Almost 12 years ago, as my sixtieth birthday approached, my family decided I needed a dog.

The thinking, so I was later told, was to provide me with daily exercise and perhaps fill a bit of the empty nest-void resulting from our children having headed off to college.

My wife and two kids had heard me speak fondly of my parent’s dogs, Boston terriers. The first was Phoebe (so named by my dad for a fleeting — or was it fleeing? — girlfriend of mine), and then Rufus (again, named by my dad, this time for a character portrayed by my brother Tom in an IHS play).

In later years, my mom had owned a Jack Russell terrier, Penny. For our kids growing up, it had been the dog in their lives.

But this would be the first dog to come into our immediate family. My son and Karen did copious research and decided a Labrador retriever would best fit the bill. They furtively reserved a pup from an upcoming litter and presented me with a picture of my new best friend as a birthday gift.

The chosen one was a female, smaller than her siblings. We named her Tashi, after a dog that had followed our family on a multi-day trek in Bhutan’s Himalayas. Our guide had told us it meant “good fortune.”

From our perspective, Tashi more than lived up to her name.

Like virtually all labs, she is food-driven and thus relatively easy to train and motivate. She shares her breed’s other traits, including a beguiling tilt of the head and a goofy grin, as well as a saint-like tolerance of children and an unbounded enthusiasm for any visitors.

As a bonus, Tashi does not bark (other than an occasional and barely audible “woof” while chasing an imaginary rabbit as she sleeps). This makes her a less-than-ideal guard dog; indeed, she would make a better accomplice.

Tashi particularly loves car trips, long or short. This gives me a ready companion when I head out solo on travel writing assignments. A few years ago, I went to Ipswich, South Dakota, (for a Chronicle piece) and then to Mount Rushmore and the Little Bighorn Battlefield National Monument in Montana For HuffPost.

Tashi was the perfect traveling companion, happy in the knowledge that I would split my fast-food french fries with her. (Traveling away from Karen’s watchful eye allowed us both greater culinary leeway than at home.)

Tashi loves boating on Ipswich Bay and — most especially — roaming around the sandbars off Crane Beach at low tide. She also revels in our family’s annual late August week at Camp Wiyaka, nestled in the hills of New Hampshire, where she and upwards of a half-dozen other dogs frolic leash-free.

But the time that has mattered most, to us, her human companions, are the past 10 months. We have, of necessity, been cooped up, but she has made things infinitely easier. I firmly believe it will be found that dogs will have saved more marriages than all human marriage counsellors combined during this pandemic.

We are not yet ready to say a final goodbye — the vet says there might be a few months left — but every day we will be saying “thank you” and giving her a larger share of hugs. And as much of her favorite food as she wishes. She is, after all, a lab.