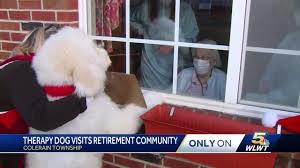 The holidays can be a lonely time for nursing home residents. That rings particularly true in 2020 when most residents cannot have in-person visits with family members.

The Triple Creek Retirement Community had a special guest Friday to help with the isolation and to bring some holiday cheer.

Several of them even greeted her with hand-drawn signs, expressing their excitement.

“It gives us pleasure just to take Annie around and let her look in the window for a few seconds and give them a few seconds of happiness,” said Jack Rahn.

He and his wife Lori take care of Annie Rose and bring her to nursing facilities several times a year. Triple Creek has become a favorite stop for them around the holidays.

“Our parents were elderly and they were in nursing homes and you can’t imagine how these people feel not necessarily knowing what’s going on on the outside,” Jack Rahn said.

This year, they know it is especially important for residents to feel connected to the outside world.

“We want them to know that the outside world is still thinking about them, cares about them and loves them,” Lori Rahn said. “They love her. They look forward to her visits.”

Mollie Zinser, who works for Trilogy Health Services, the retirement facility’s parent company, said 2020 has been difficult on staff members and residents.

“COVID has been a long road, particularly for our residents and the opportunity to see the joy that Annie Rose brought to them today, I think we all needed to see a little bit of that,” she said. “It was exactly what they needed as we approach the holidays.”

She explained that the facility’s life enrichment team coordinated visits with residents in different parts of the building.

“Those are the folks that you would have seen today that were going room to room, changing their PPE each time, making sure that the residents got to the window,” she said.

Dorothy Gillespie is one of the residents who was visibly excited about Annie Rose’s visit.

“You come back again, Annie. Anytime,” she told the dog.

“Don’t tell her I like cats,” she joked with the Rahns.

Gillespie’s children have come for window visits at the nursing facility, but she said she misses hugging them. She is disappointed they won’t be able to have a big family Christmas dinner this year.

“There’s Linda, there’s Tommy, there’s Bobby and there’s Betty,” she said. “Merry Christmas. I can’t see you in person, but I’m thinking about you.”