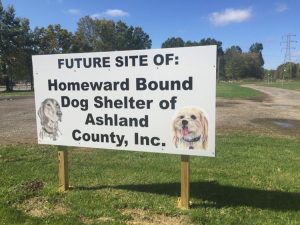 ASHLAND — The organizers behind Homeward Bound Dog Shelter intended to begin construction of their multi-service facility in April, but development has been postponed indefinitely due to the ongoing COVID-19 pandemic.

The shelter is still roughly $200,000 under their construction goal, but the group is not actively seeking donations because of the health crisis the community is currently addressing.

“(The fundraising) came to a screeching halt for right now,” the secretary of Homeward Bound, Dianne Hammontree said. “We’re still working closely with the shelter and No Pawz (Left Behind) and placing dogs even though a lot of things are shut down.

Still, throughout the delay, Hammontree and the rest of the shelter’s team has been hard at work aiding man’s best friend, following their mission to a tee.

Homeward Bound strives to rescue homeless dogs and administer the proper physical, medical and emotional care they require.  Their philosophy is to end the suffering all dogs and help them find enriching lives through companionship, love and nourishment.

To raise the additional money for the construction goal, Homeward Bound was allowing the community to dedicate one of the shelter’s 70 kennels for $1,000. They have currently sold 20 of them.

Hammontree, who owns three dogs herself, has already purchased one for a dog she previously enjoyed.

“We were able to buy one kennel to name after our dog we lost last year named Simon Peter, but we still have an old dog named Mary Magdalene, so we’re trying to save another $1,000,” said Hammontree.  “Mary is a therapy dog.

She is actually the first Ohio court dog, so if there is an abused child on the stand, she’s on their lap.”

Homeward Bound Dog Shelter will be constructed on Baney Road in the grass parking lot across from the fairgrounds.  It will feature a on-site veterinarian and groomer.

The American Legion is purchasing and installing a flagpole on the property.

No Pawz Left Behind will have an office in the facility and will utilize some of the shelter’s storage area.

“We work with [No Pawz] now,” said Hammontree.  “They help us place shelter dogs, and we help them place No Pawz dogs.

When the social distancing regulations soften and business begin to reopen, a display of the layout of Homeward Bound Dog Shelter will be available for public viewing in the lobby of Wayne Savings Community Bank on Claremont Avenue.

Hammontree also expressed her gratitude of The Flour Barrel for all of their assistance during this fundraiser.  She asserted that this wouldn’t be possible without the efforts of the volunteer planning committee.