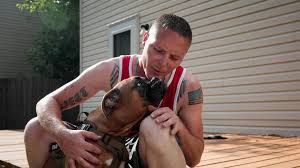 Jason Manley contacted some local service dog organizations to get a dog but was told the waiting list was up to two years. Feeling he couldn’t wait that long, Manley and his wife, Jessica, decided to try to find one on their own.

One Saturday morning in May 2016, retired Army Staff Sgt. Jason Manley and his wife visited an animal shelter to look at dogs, but he had no idea they would bring home one that would forever change his life.

Manley, 37, of Columbus’ Far South Side, had served five combat tours from 2003 until 2009 in Iraq and Afghanistan. In 2010, he was diagnosed with chronic post-traumatic stress disorder from the horrors he had witnessed during those years.

Though Manley eventually received treatment and found a job at a golf course as a maintenance crew member, he continued to struggle with PTSD, so in 2016 he looked into the possibility of getting a service dog.

Manley contacted some local service dog organizations but was told the waiting list was up to two years. Feeling he couldn’t wait that long, Manley and his wife, Jessica, decided to find one on their own.

Thinking back to that moment when he first met Abraham Lincoln, Manley can remember many details and it still gives him chills.

“As soon as they bring him into the room, he runs up and immediately gets in my lap … he’s sitting on my lap, and my wife’s in there, the other volunteer is in there, but he was only interested in me,” Manley said of the meeting at the Franklin County Dog Shelter. “And you know, it was at that point I knew that he was mine.”

Manley adopted the year-old boxer, which he later named after his favorite president. After bringing Abraham home and starting to train him, Manley said he began feeling some relief from his anxiety, depression and fear of new places and people.

“These dogs don’t just change your life. On any given day … these dogs can save your life,” Manley said. “If I didn’t have Abraham, I don’t know how far I would have gone to find relief from the torture that PTSD can be.”

While attending Columbus State Community College for a degree in landscaping, Manley was looking to start a program there to help other veterans train their own service dogs like he had done. He met with the college president, who introduced him to Heather Lane, a local veterinarian who was starting her own program.

Veteran Companion Animal Services helps pair veterans in central Ohio with rescue dogs from local animal shelters and assists them in the first year of the adoption process. Since 2015, the nonprofit program has paired seven to 10 veterans with dogs from shelters each spring and fall.

Manley became board president of VCAS in November 2019. Throughout the years, Manley has visited schools and fundraisers to help VCAS grow and taken Abraham with him whenever he could.

“When Jason and Abe would go and speak with other veterans or other groups of people, (they) could tangibly see, ‘Wow, like that’s what this dog does for him,’” Lane said. “You know, if you’re speaking to a group of veterans, the dog just kind of puts them at ease and relaxes them.”

In October 2019, however, Abraham started to struggle with walking and was later diagnosed with degenerative myelopathy, a disease in older dogs that causes progressive paralysis. Abraham died on Jan. 27, 2019. Manley and members of VCAS wanted to create something to remember him by and help other veterans in the way Abraham had helped Manley.

“We talked a lot just about the impact that Abraham has had over the years. And his story is so special, we wanted to be able to share that,” Lane said.

The “I’m With Abe Club” started in June to increase the number of veterans paired with dogs. Members of the club donate a minimum of $10 each month towards VCAS programs.

Donations go to help defray such expenses as adoption fees and training and dog supplies. So far the club has raised just over $4,000 and is projected to reach $23,000 by the end of the year, Lane said.

The Nick Rozanski Memorial Foundation has donated $10,000 to VCAS and has partnered with the “I’m with Abe Club.”

The foundation was formed in 2012 and is named for Capt. Nick Rozanski, a 1994 Dublin High School graduate who died serving in the Ohio National Guard in Afghanistan. Since its inception, the Dublin-based foundation has provided scholarships to students at Dublin’s three high schools and grants to groups that help veterans, said Jenny Rozanski, Nick’s widow and co-founder and president of the foundation.

“The support animal organizations have come up pretty much every year when we’ve talked about giving money to someone, we just hadn’t landed on one that we were interested in working with,” said Jenny Rozanski. “And so when this came it kind of was a no-brainer that we would partner with them.”

Through the extra money gathered by the “I’m With Abe Club,” Manley hopes to help the veterans — much like him — who cannot wait for a service dog through other programs or who do not qualify for one.