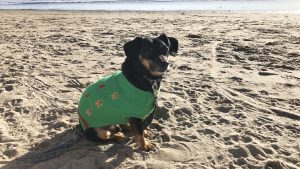 One minute he’s a “Grangel”—sitting quietly, snuggling, or (my favorite) sleeping. The next he’s full on “Grucifer”—shredding things, yipping so loud he wakes up the neighbors, and straight up raising hell. I never know which Groot I’m going to get.

His name may mean “big” in Dutch, but the only colossal thing about the 11-pound chiweenie is his slightly deranged, and refreshingly chaotic, personality. Well, that and his ridiculously floppy ears, which never cease to mystify and amaze.

I love the little dude. He’s been with me through thick and thin—a fire, the Trump era (a fire in its own right), some brutal losses, a global pandemic, and a pretty shitty breakup. When I finally extricated myself from a toxic four-and-a-half year relationship (ugh), I fought hard to keep him. Groot is my dog.

I was the one who found him—and his oh-so-adorbs puppy mug shot—in the back of the Auto Shopper Magazine. I was the one who drove all the way to Hollister, handed over 150 of my hard-earned sheckles, and liberated the 6-week-old furball from an evil kitty overlord and weird-and-slightly-creepy owners. They told me they thought that he was a pug! They had no clue.

For having a wee little pea brain, Groot turned out to be a pretty smart cookie. On hikes, or at the disc golf course, he confidently leads the way—understanding the paths and way around the forest better than his human counterparts. If he wants or needs food, he’ll nod his head at and stare, with slightly watery eyes, at whatever he aims to nosh. If he needs to pee, he’ll patiently wait by the door for me to let him outside. He doesn’t really say anything, but he says a lot.

Angels sang and rejoiced (or maybe it was Enya?) as the sun broke through clouds in a periwinkle sky on a cool and crisp autumn morning, casting light on the Pearly Gates (er, wooden gates) of Chanticleer Dog Park. Birds chirped nearby, and morning dew drops clung to blades of grass in a recently manicured field, shining like diamonds. It was a monumental day, the happiest in Groot’s life. It was the day he learned to pee on things.

Dogs lift their legs to urinate on things they consider theirs. To let other doggies know that they are present, and to signify their reproductive status and canine ranking. It was obvious from the get go that Groot had high aspirations—and some kind of Pinky-and-the-Brain-type complex going on.

Pinky: “Gee Brain, what are we gonna do tonight?”

Brain: “The same thing we do every night, try to take over the world!”

It may have taken him a while to catch on, and to truly understand the power of his pee, but during his five brief years, Groot has made it his mission to slowly but surely take over the world, one lifted leg at a time. He’s blossomed into an eccentric, semi-obsessive artist—the Picasso of Pee—practicing and perfecting his form and technique wherever and whenever he can.

I can deal with his urinary urges and peeing proclivities today—heck, they’re kind of cute—but OMG potty/house training the little dude was an absolute nightmare. Good ol’ Wikipedia taught me that proper house training is all about positive reinforcement, consistency, and patience. But it didn’t begin to explain just how patient you’ll need to be. Typically, it takes puppies 3-6 months to be fully house trained. That would have been a dream come true! It took my little furball close to a year and a half to cease his peeing on the walls and carpet, not to mention dropping deuces in my bathroom, kitchen … and bed.

Today, Groot is a Grangel most of the time. He’s 100% potty trained, my devoted caddy on the disc golf course, my wing man at the beach  (26th Avenue is our spot!), and he doesn’t rip up carpet, shred my pillows, or gnaw through the legs of my coffee tables. He was a lot to handle as a puppy. Some days I miss that side of him—adorable little Grucifer—but most of the time I’m just grateful that he’s finally mellowed out.

His Napoleon complex is largely gone now. Yes, Groot still has ambitions and aspirations of ruling the world, but long weekends of training and “Puppy Kindergarten” have taught him proper bite inhibition, socialization, and (mostly) obedience.

A few years ago, I wouldn’t have dreamed of taking Groot into a store or a restaurant with me, or into one of my classes at UCSC. But today, Groot and I are a package deal. As a certified emotional support animal, he saunters along beside my shopping cart in Whole Foods, chills silently under my table at Lillian’s Italian Kitchen, and cowers behind my chair in the shade at the beach. I can’t tell you how much it means to have such a loyal, sweet, and yes, slightly deranged, companion by my side each and every day. And, in case anybody asks, yes, I have a note from a doctor and yes, Grootie is certified. He’s got a red vest and everything.