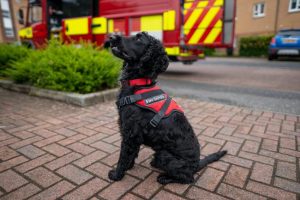 The two-year-old spaniel named Phoenix has been trained to detect the location and cause of deliberate fires over the past year.

Phoenix can detect the slightest trace of ignitable liquids up to one metre below debris left by a fire, Glasgow-based firefighter and dog handler Jonathan Honeyman revealed.

But the clever pup’s talents do not end there – he is also part of community engagement work to educate young people about the risks of fire setting as well as providing comfort to victims of traumatic fires.

He said: “Phoenix has come on leaps and bounds since we first started working together.

“Phoenix can be brought on-site hours, days or weeks after an incident to search a wide radius to trace any evidence, which is a huge advantage to us. He is without a doubt a valued member of our investigation team.”

Firefighters were called out to more than 1700 deliberate secondary fires in Scotland last summer.

Secondary fires refer to small outdoor fires, but the SFRS warn they can have catastrophic consequences and cause injury and death, spread to nearby properties, affect local businesses and also threaten wildlife within areas of natural beauty.

“These locally run programmes involving SFRS staff and our partners are often extremely successful in outlining the dog’s capabilities and therefore driving down fire setting.”

“If he could speak, I am sure Phoenix would encourage young people to act responsibly this summer and avoid putting themselves and communities at risk.”

Before joining the SFRS, Phoenix spent almost a full year with the Scottish SPCA.

He was rescued from the illegal puppy farm in Aberdeenshire in 2017 following an investigation which resulted in a criminal conviction.

Manager of the Scottish SPCA’s rescue and rehoming centre in Glasgow, Anna O’Donnell, said: “Our team did a fantastic job with Phoenix, who was in our care for 321 days. Phoenix, being a spaniel, is energetic, very clever and obedient so we thought he was the perfect fit for the Scottish Fire and Rescue Service.

“We are pleased to hear that he is now trained and working to keep communities safe by educating young people on fire safety.”

David Dourley, SFRS Head of Fire Investigation, said: “I’m delighted to introduce Phoenix to our communities and I’m sure this valuable and capable resource will assist our FI teams across the country.

“Phoenix not only enhances our fire investigation capabilities at complex fire scenes, but he will support our partners and contribute hugely to community engagement work, also providing comfort and wellbeing support to the victims of traumatic fire.”