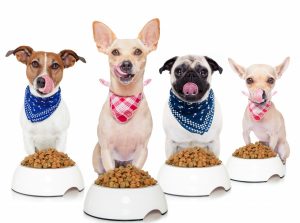 Hundreds of dogs living in largely Alaska Native villages in southwest Alaska won’t go hungry this spring after more than 8,000 pounds (3,629 kg) of dog food were delivered, a humanitarian effort coordinated by two of the nation’s largest animal welfare groups in response to the coronavirus pandemic.

The 242, 30-pound (13.6-kg) bags arrived in Bethel, a southwest Alaska hub community, late Thursday on a cargo plane from Seattle.

The single employee of the Bethel Friends of Canines worked Friday to break the pallets apart and ferry the bags back to their building. There, the food will be stored for eventual distribution to those in need, including dog owners from about 35 communities dotting southwest Alaska’s Yukon-Kuskokwim Delta.

“Well, it’s definitely needed, and I think we are just very aware that the supply chain might be damaged in the near future,” said Theresa Quiner, the Bethel shelter’s vice president. “So it’s really comforting to know that we have this stash of dog food now in case people aren’t able to get dog food.”

The dog food drop from the American Society for the Prevention of Cruelty to Animals and the Humane Society of the United States was necessary in roadless western Alaska because travel restrictions and dwindling supplies is making delivery of dog food to the region difficult during the coronavirus pandemic.

And it’s not just dog food. Quiner said she tried to order flour off Amazon and was told it would take a month to arrive. Many people order their dog food through Amazon.

“It’s really heartwarming that these organizations thought of us and just immediately knew that the supply chain gets difficult for everybody all over the country, that the communities out here in the Yukon Kuskokwim Delta are more vulnerable than elsewhere,” Quiner said.

The Bethel group has been a partner of the Humane Society’s Pets for Life program, which focuses on providing access to pet resources for people living in poverty or underserved communities. The group has been providing services and supplies to Yukon Kuskokwim Delta villages, said Amanda Arrington, senior director of Pets for Life.

“When the COVID-19 crisis happened, it just made it even tougher for us to get supplies up to Alaska,” Arrington said. “Even during a good time, it’s not easy logistically. It’s definitely not cheap, and so food supplementation is something that is an ongoing need, and it’s even greater right now.”

The humane society ordered and purchased the food at cost from FristFruits Feed of Redmond, Washington. Owner Tim Matts agreed to order and sell the 8,000 pounds (3,629 kg) of dog food at cost. The dog food was delivered Wednesday, repacked on 800-pound (363-kg) pallets and delivered to the Seattle airport for transport to Alaska.

FirstFruits refers to the company’s philosophy.

“We always believe that you should give the first 10 percent of your profit to the community to help animals and to help people, because we recognize that animals are a very important role in people’s lives,” Matts said. “We’re just grateful we could help.”

“Right now, we’re moving that amount of food daily in our other locations. But to get to Alaska is certainly a challenge, and it’s great to know there are people there who can use it,” she said.