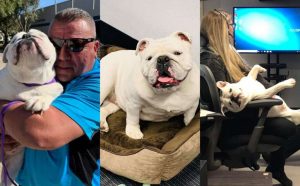 Bella is a 6-year-old British bulldog that was found abandoned in a car after her previous owner fled the scene of a crash. The city of Webster’s dispatch center adopted Bella as an emotional support dog in late 2019.

Most days at the City of Webster’s dispatch center are chaotic, according to Assistant Chief of Police Pete Bacon. The center takes calls from fire departments, emergency medical service stations and police departments across the region 24 hours a day, 365 days a year, which often takes a toll on the mental health of the telecommunications officers (TCOs).

“There are times when there are phones ringing off the wall constantly,” Bacon said. “It’s a pressure-cooker environment.”

The center is run by 14 TCOs that are the city’s first line of defense in emergency situations. Bacon said after Hurricane Harvey inundated the call center in 2018, it was decided the TCOs would benefit from more mental health services, such as an emotional support dog.

“At one point we literally had hundreds of 911 calls backed up on the queue,” Bacon said. “Normally when we call 911 we expect help to be able to arrive but in this situation, help couldn’t come. That was really stressful for these officers.”

Since Harvey, the city has been searching for ways to help alleviate the stresses TCOs deal with on a day-to-day basis. At the end of 2019, officers found the perfect answer when the city adopted a deaf, 6-year-old British bulldog named Bella.

“Bella is a calm and affectionate bulldog. She is deaf, which is a good thing since the call center can be pretty chaotic,” TCO Tiffany Swanson said in a Facebook post from the city. “You can’t stay upset when you’re petting a dog.”

Bella was found abandoned in a car after her previous owner ran away from the scene of a crash. Webster Animal Control Officer Amanda Trover came across Bella after she was rescued and knew she would make a perfect fit for the dispatch center, Bacon said.

“She [Trover] is a behind-the-scenes hero, she doesn’t get enough credit for what she does,” Bacon said. “She recognized that that dog was the right fit for us and she was right.”

Bella lives at the dispatch center and is cared for by the 14 TCO’s and police officers that routinely drop in to visit her. Dog beds are spread throughout the call center and she has her own spot in the employee lounge where she spends her time snoozing and snacking. A local veterinarian visits Bella once a week for free and has helped the dog recover from her kennel cough and an ear infection that she was diagnosed with when she first came to the center.

“It does wonders for their mental state up there,” Bacon said. “Having Bella improves their spirits and improves their morale. She has been a wonderful thing for us.”

Since news of Bella’s adoption spread, Bacon said she has basically become famous. Bella is even attracting potential employees that Bacon said have reached out and said they wanted to apply simply because of the adorable bulldog they know would make their job much more enjoyable.

“The social media feedback we have had has been overwhelmingly positive,” Bacon said. “Just the fact that we have Bella [also makes] a difference for us in recruiting.”

Bacon said adding Bella to the center has been a win-win for everyone involved. The officers enjoy her company during stressful situations and Bella has been given a new lease on life.

“She is just very sweet and loving and calm,” Bacon said. “She loves to visit with people and her favorite game is to chase the officer’s flashlights on the ground. She is a very gentle soul.”