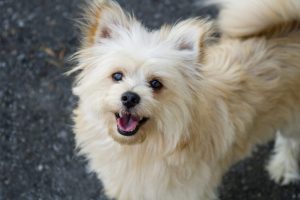 The upside of spending so much more time indoors is you’ve got more time to look at cool dogs on the Internet. The labradoodle (Labrador and poodle) was the first “designer breed” that boasted widespread popular appeal. They were first created in the middle of the 20th century. They didn’t gain popularity until the early 90s as service dogs for people allergic to pet dander. Their popularity spread thanks to their goofy personalities, soft fleece coats, and amiability towards children. The cockapoo (cocker spaniel and poodle) followed in the labradoodle’s paw prints, and then it was off to the races for designer breeds. “Doodles” and “poos” are common, because poodles don’t shed as much as other breeds, but they’re just the tip of the iceberg. We bet you’ve never heard of these 10 boutique dog breeds.

These little dogs are ideal apartment dogs, with cheerful dispositions and great trainability. They require plenty of exercise, as they’re prone to wait gain. Socialize them early and they’ll do great with young children and busy households.

Both the schnauzer and poodle come in a variety of sizes, from toy to giant. Because of this, you can get a schnoodle in any weight class, from 6 pound apartment dogs to 76 pound giants. They bond with their owners, and because they’re smart and active, they love advanced training

These two dogs are so closely related, you may not distinguish a Labrador from a goldador at first glance. They’re popular in law enforcement for drug sniffing, as search and rescue dogs, and as family pets because of their gregarious nature and ease of training.

The appeal of the pomsky is obvious, they look like miniature wolves, adapted to city living. As far as designer breeds go, this hybrid is new, and combines two unique personalities, Pomeranians bond with their families, while huskies tend towards independence.

This hybrid is hypoallergenic and doesn’t shed thanks to the bichon frise. They have soft fluffy hair and grow to around 15 pounds. They’re accepting, tolerant, and enjoy spending quality time with their owners. It’s a great breed for apartment dwellers and retired individuals.

These are playful small dogs that love being around their family and get along great with children of all ages. You can rely on them as guard dogs who will bark to notify their owners of suspicious activity around the home. Because of their tenacity protecting the home, they may not be ideal in an apartment building.

Sure, it sounds like a chant at a frat party, but this petite dog breed is ideal for families and city dwellers. They’re loyal, playful, and have goofy personalities. Since they’re prone to weight gain and yappy barking, plenty of exercise is essential for their happiness and health.

An unusual combination, basadors combine the tenacity of the hound with the trainability and sociability of the Labrador. They require regular exercise and short training sessions to keep their attention engaged.

These are intelligent and affectionate dogs who require regular training to engage their minds, and plenty of exercise. They require plenty of space to roam, but are perfect for people with allergies who want an active and trainable breed.