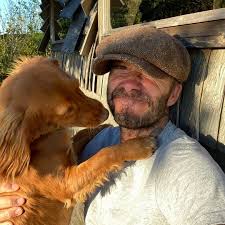 The England legend, 45, was showered with kisses from Cocker Spaniel Sage, as he shared photos with the family’s two older dogs Olive and Fig.

David and Victoria added Sage to their family last year as a present for daughter Harper, eight.

The star wrote on Instagram: “Happy International dog day sage trying her luck with a kiss on the lips”

Becks wasn’t the only celeb to post sweet photos with their furry friends.

Olivia and Alex Bowen also paid tribute to their “babies” sharing adorable snaps of their French bulldogs Winnie and Reggie.

It was started by by Pet & Family Lifestyle Expert and Animal Advocate, Colleen Paige.

The day, August 26 is especially poignant for Colleen as it’s the date that Colleen’s family adopted her first dog “Sheltie.”

On their website, National Dog Day describes its aim as “to help galvanize the public to recognize the number of dogs that need to be rescued each year and acknowledges family dogs and dogs that work selflessly each day to save lives, keep us safe and bring comfort.”

In 2013, the day was written into New York State legislation and has since been adopted the world over by dog lovers of all nationalities.

International Dog Day is a time to celebrate our special pets, but also to help and recognise the number of dogs worldwide who face cruelty and harsh conditions.

The day was created to recognise all dogs – from family pets, to service dogs, to those awaiting adoption.