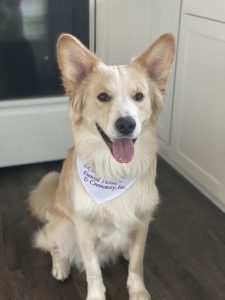 While Clearfield’s Seth Beardsley was studying at the Pittsburgh Institute of Mortuary Science — from where he graduated in the fall of 2018 — one of his instructors had a therapy dog at the funeral home he owned.

John Elachko, who owns John N. Elachko Funeral Home in Pittsburgh, has a therapy dog and taught Beardsley quite a bit about what the dogs do in a funeral setting.

Beardsley’s father Kevin had also talked about getting a therapy dog for Beardsley Funeral Home and Crematory in Clearfield, but never moved forward with it while Seth was away at college and mortuary school.

But with the younger Beardsley now back in Clearfield full time as a licensed funeral director, the time was right to look into a therapy dog.

“My plan with my dog is to have him trained to be a certified therapy dog to be here for grieving families at the funeral home,” Beardsley said. “He still has a lot of training to do, and can’t become certified until he is at least 1-year-old. He is still getting familiar with the funeral home and isn’t here all the time yet.”

Beardsley, who has had Charlie since August, also wanted a pet to keep him company.

“I got Charlie because I had been living on my own for about a month and decided I could use a companion in the house,” Beardsley said. “But also with the plan of having him become a therapy dog.”

Charlie has already done some basic obedience training, going to a few group classes at Waggin Trains when he was a little puppy before recently taking a two-week training session at K-9 University.

“He’s a very smart dog and reacted well to the training, but still has a ways to go before he’ll be at the funeral home full time,” Beardsley said. “Once he’s ready, I can have him tested to become a certified therapy dog.”

Besides training to be a therapy dog, Charlie has a long list of favorite activities.

“When he’s not training, he enjoys playing with his ball, chewing on his bones, going for walks, getting treats, and being a good boy,” Beardsley said.

Once Charlie is certified, he will be available to be at any of the services offered at the funeral home to help console grieving families.

“Every family will have the option to have Charlie present at a visitation, funeral, etc., where he will be present for short periods of time throughout to provide comfort to those who are grieving,” Beardsley said. “Petting a dog increases serotonin and dopamine levels in our brain, which can lower stress, anxiety, and depression, all of which people grieving could be feeling.

“Charlie will also be available to be at the arrangement conference for all the same reasons.”

Beardsley says Charlie can also provide joy to members of the community when he isn’t comforting grieving families.

“When he’s not at the funeral home, I can do things like take him to nursing homes to visit the residents to brighten their days,” Beardsley said.

The addition of a therapy dog is something he thinks will be a welcome addition to the services already provided by Beardsley Funeral Home and Crematory.

“Charlie loves people, and we look forward to having him available to comfort the families we serve,” he said. “We will keep everyone updated of his progress on our Facebook and Instagram pages.

“I walk him quite often around town, so if anyone sees us and would like to meet him and pet him feel free to stop us. We strive to continuously improve our services and we think Charlie can help us do that.”