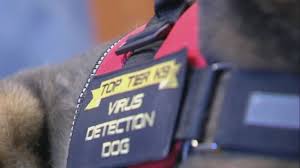 A dog may be a man’s best friend, but a North Florida dog trainer wants his trained dogs to be the coronavirus’ worst enemy.

50 dogs at Top Tier K9’s training facility are in line to be among the first in the country to be trained to sniff out the coronavirus.

Jeff Minder is a former survival instructor for the Air Force. He has a patented 50-point dog training system and saw a need.

He says the virus-sniffing dogs could prove useful in areas where people congregate in large groups.

“Immediately is churches, and then the airports where people feel safer traveling,” said Minder.

Uzi, a Belgian Malinois, is his personal dog and has compiled a record more accurate than testing.

“Their success rate at finding that virus is, actually, for the last two weeks, has been 100 percent. But it’s 95, 96 percent based on all the work I’ve done,” said Minder.

Nobody was exposed to the virus for the videotaped training session, and Minder wouldn’t say how he got the virus samples, only that they were expensive.

Depending on the breed, it will take anywhere from eight months to two years to train the dogs.

Once trained, adding the virus to a dog’s portfolio can take up to an additional eight weeks.

“There are independent individual odors within that virus that these dogs are finding. We think we know exactly what part of the virus they are finding, but that’s very hard to prove,” said Minder.

Minder said about half of the dogs in training already have a potential owner.

If the virus mutates, Minder said the mutation will be on how it affects people, not on how it smells to a dog.