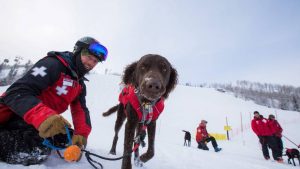 A Queenstown-based avalanche search and rescue dog is stranded in the United States.

Brad Saville, a 38-year-old ski patroller, is “devastated” his 18-month-old curly-coated retriever is stuck in Colorado where the pair had been undertaking avalanche dog training as part of a ski patrol exchange programme.

The pair had been in Colorado since December and were meant to return to Queenstown on April 24 but when the coronavirus pandemic took hold he was given a 48-hour window to fly home to New Zealand. Saville returned on March 26, but Bomber, who was meant to follow on another flight after final vet checks, did not make it.

“I received notice from my pet transport company, based in LA, that Bomber’s flights back to New Zealand are suspended until further notice.”

Thankfully, Bomber was able to stay with the people Saville had stayed with during the exchange.

“Each and every day is a huge mental and emotional struggle for me. Every day I wake up and every night I go to sleep, all I can think about is my curly-coated retriever. I’m devastated. Bomber is everything to me.

“It’s not just people stuck in limbo. Animals are involved as well and Bomber – who is a service dog for his country – is stuck on the other side of the world relying on us humans to sort it out.”

As well as missing his best friend, he was worried the time apart would affect the intensive training that had been invested in Bomber.

“The bond is everything when you are training a search dog. The time and investment to travel internationally with an animal is a huge undertaking.

“To keep him on the snow for three winters within the first two years of his life allowed for enormous potential of becoming certified for this New Zealand winter … If the time apart extends further I fear it will be damaged to a point I will not be able to fulfil my ambition of turning him into a search and rescue dog.”

Saville, who has been a ski patroller for nine winter seasons, introduced Bomber to the ski patrol team in 2019. They had attended two training camps, and at 10 months old Bomber passed his obedience assessment at the Snow Farm.

“He and I are the youngest search team-in-training within the New Zealand LandSAR Search Dog Programme in the avalanche discipline and the only team located in the Wakatipu Basin. An avy dog is trained to save lives within a critical time period. And they love doing it. We train them to make it the most fun game in the world. Being on the snow with my best friend who I work with and spend every waking moment with, is the absolute highlight.”

The training in Colorado had exposed them to invaluable learning — better handling skills, a large variation of search drills, obedience tactics, and how to better themselves as a team, he said.

“We even received a scholarship to attend an avalanche search and rescue dog school … My ambitions definitely backfired. I am devastated at the Covid-19 outcome from my ski patrol exchange to Colorado but getting Bomber home is the most important thing in my life right now.”