Coronavirus and pets: How COVID-19 affects cats and dogs 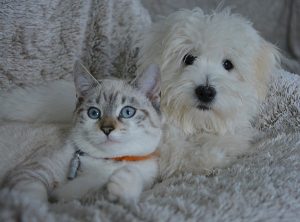 Coronaviruses have lived and thrived in animals for thousands of years, but only a handful have been known to cause illness in humans. The coronavirus at the center of the current pandemic, SARS-CoV-2, is incredibly successful at spreading from human to human. As of early April — just four months after it was first detected — the virus had infected over 1 million people and spread to over 180 countries.

It turns out that SARS-CoV-2 can hijack animal cells, too. Scientists believe the disease originated in Chinese horseshoe bats before it jumped into an intermediary animal and, from there, found its way into humans. The virus is able to inject itself into cells by binding to a cell surface protein known as ACE2, which is present in many species of animal.

Some media reports have shown that the coronavirus can infect our companion animals — and more exotic species like tigers and lions — but cases are rare. It appears that transmission of the disease from human to animal is low, and there’s no reason to think you might catch the disease from a feline friend who has been wandering the neighborhood. The World Health Organization states there is “no evidence that a dog, cat or any pet can transmit COVID-19.”

Still, pet owners are understandably worried about the health of their fur babies and how COVID-19 might affect them. We’ve gathered everything you need to know about coronavirus and your pets here, along with emerging research in how animals may spread or be affected by the coronavirus.

Can the coronavirus infect cats and dogs?

Coronaviruses are not particularly hard to please when it comes to potential hosts — they’ve been detected in many mammal and bird species, including dogs and cats, as well as livestock like cows, chickens and pigs.

There have been several reports providing evidence of SARS-CoV-2 infection in household pets. A 17-year-old dog in Hong Kong repeatedly test “weakly positive” for coronavirus in March and later died. A cat in Belgium tested positive for the disease on March 24.

“These pets were living with infected human owners, and the timing of the positive result demonstrates human-to-animal transfer.,” said Jacqui Norris, a veterinary scientist at the University of Sydney in Australia. “Virus culture on these pets was negative, meaning that an active virus was not present.”

A study by researchers at the Harbin Veterinary Research Institute in China, uploaded to bioRxiv on March 30 and yet to be peer-reviewed, examined the susceptibility of a number of species to COVID-19, including cats and dogs, using a small number of animals.

The results demonstrated that cats can be infected with the coronavirus and may be able to spread it to other cats via respiratory droplets. The team placed infected animals in cages next to three animals without the disease and found, in one case, the virus had spread from cat to cat. The felines didn’t show any outward signs of illness, however.

Dogs appear to be more resistant. Five 3-month-old beagles were inoculated with SARS-CoV-2 via the nasal passage and housed with two dogs not given the virus. After a week, the virus was not detected in any dogs, but two had generated an immune response. The two dogs that did not receive the virus did not acquire it from their kennel mates.

One of the key takeaways, as highlighted by Nature, is that these experiments were performed in a laboratory setting and that high doses of the coronavirus were used to infect the animals, which likely does not reflect real-life conditions. Nevertheless, cats do appear prone to infection, and the authors note further monitoring should be considered.

IDEXX Reference Laboratories, a consortium of testing labs across the globe, announced in March that it had created a testing kit for felines and canines. After running tests on over 4,000 specimens from the US and South Korea, it found no positives. The US Department of Agriculture has stated it will not test companion animals unless testing is agreed upon by animal and public health officials due to “a link to a known human case of COVID-19”.