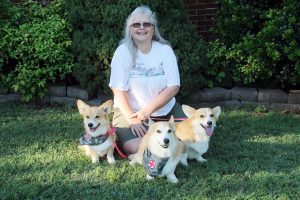 When Sylvia Stuckey gives back to her community, she often receives help from two four-legged friends. These companions are her Pembroke Welsh Corgis — Clint and Victoria.

Certified through the Fort Knox Red Cross Pet Therapy pro­gram, Clint and Victoria have been major assets for Stuckey when helping the community, especially through her place of employment, James T. Alton Middle School.

Teaching special education at JTA, Stuckey began bringing her Corgis into the classroom in 2018. Often instructing children with behavioral issues, Stuckey said the dogs are a comforting presence for students.

“Some days I may have a student that asks for a ‘Corgi Break,’ where they can stop what they are doing and go sit down and spend some time with one of the Corgis before settling back into their work,” she said. “I allow the students this time and I have observed that this has really helped students to keep from having an emotional meltdown.”

“During their planning time I may have a visit from a teacher because they also needed a ‘Corgi Break,’” she said.

As schools closed this year because of the COVID-19 pandemic, Stuckey found ways to incorporate Clint and Victoria into her non-traditional instruction plan. She said during daily Google Meet video conferencing sessions with students, Clint, Victoria and Stuckey’s third Corgi, Gabby, joined in.

“Although Gabby is not a certified therapy dog at this time, she was happy to get some attention from the students,” Stuckey said.

While schools were closed, some JTA staff members and bus drivers remained in the building to prepare meals and deliver student work. Naturally, Stuckey decided to let her Corgis visit with those still working inside the building.

“The bus drivers, faculty and staff were very appreciative and enjoyed their time visiting with Clint and Victoria,” she said.

Born in Heidelberg, West Ger­many, Stuckey’s family moved to Fort Knox in 1972. They moved to Elizabethtown after Stuckey’s father retired from the U.S. Army in 1977.

A 1983 West Hardin High School graduate, Stuckey earned a degree in education from Camp­bellsville University and earn­ed teaching certifications in the areas of special education and assistive technology from the University of Louisville.

Stuckey said her passion for education began while attending Immanuel Baptist Church in Elizabethtown, where she volunteered to assist youth in the congregation.

“I worked with the youth at Immanuel for many years with Dianne Cottrell and Scott Wig­gins and enjoyed the time with the youth department and the experiences that I gained with the youth,” she said. “Transi­tion­ing to education just made sense to me.”

“My original plan was to teach first grade but through my substitute teaching experiences I had many opportunities to work with special needs students and felt like God was my calling in that direction,” she said.

Stuckey also leads JTA’s Photo­graphy Club. An avid photo­grapher in her free time, Stuckey has several of her photographs displayed at Hardin Memorial Hospital and has one photo displayed at HMH’s Cancer Treatment Center. She said some of her photos have been published in canine enthusiast magazines and in the Pembroke Welsh Corgi Club Calendar.

Along the way in her educational career, Stuckey has received several awards, including the Learning by Doing Award from Carnegie Learning in 2012. Recently, Stuckey was awarded with the Exceptional Volunteer Award from the American Red Cross for her work with Clint and Victoria. In addition to their presence at JTA, Stuckey also has brought her Corgis to local assisted-living facilities to comfort residents.

Stuckey has volunteered more than 500 hours of her time serv­ing others in the community through her Corgis, according to a nomination form from Lynn Romans of Red Cross.

“Sylvia Stuckey is a dedicated and caring Red Cross volunteer who is devoted to improving life for everyone through the use of her therapy dogs, Corgis, Clint and Victoria,” Romans said in the nomination form.

Though she loves providing comfort to others through her Corgis, Stuckey also pursues other endeavors with them. Both Clint and Victoria have been awarded at regional dog shows.

Stuckey serves as president of the Ohio Valley Pembroke Welsh Corgi Club. She also trains members of the Mid-Kentucky Kennel Club in scent work and tracking as is involved in the club’s shows and trials throughout the year.

Stuckey said at this point, she can’t imagine life without a Corgi in it.

“I am honored that I get the opportunity to share them with my students and JTA faculty and staff,” she said. “My students lovingly call me the ‘crazy Corgi lady’ and this is a name that I take as a compliment.”