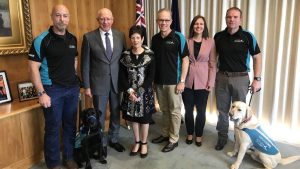 FOR THE past 15,000 years, dogs have been considered man’s best friend.

Like us humans, dogs are social animals that seek affection and attention. Dogs have long been our companions, co-workers, guards, protectors and helpers.

It is mental health service dogs which are a rising profile in the veterans’ community as their value in the assistance to those with post traumatic stress disorder (PTSD), panic disorders, anxiety, and major depression is becoming more and more apparent.

On August 5, the Minister for Veterans’ Affairs (DVA), Darren Chester, announced an increase in the availability of psychiatric assistance dogs to veterans with the addition of two new providers to the Government’s Psychiatric Assistance Dog Program, the Royal Society for the Blind of South Australia and Integra Service Dogs Australia. The Minister said this was an important program to help veterans manage their PTSD, with feedback received so far from veterans and their families that it is making an amazing difference.

“We have seen the positive outcomes from this program with veterans already sharing a special bond with their psychiatric assistance dogs, making a remarkable difference to their everyday life. These dogs are specially trained to perform specific tasks to help their owner when experiencing symptoms of PTSD, such as a night terror, and helping veterans to reach their clinical recovery goals.” Mr Chester said.

The DVA Psychiatric Assistance Dog Program began in 2019 to provide assistance to eligible veterans in the treatment and management of PTSD. Through this program contracted providers are able to supply specially trained dogs to perform tasks contributing to a veteran’s recovery.

While service dogs are not a ‘silver bullet’ in the treatment of PTSD and other mental aliments. there is evidence these dogs can help the sufferer achieve greater self sufficiency, reduce levels of anxiety and stress and assist them to cope better with day to day situations.

The body of research into the use of mental health service dogs is growing and DVA is continuing to evaluate the effectiveness of psychiatric assistance dogs in the treatment of PTSD through a partnership with La Trobe University.

Early feedback from veterans who have trialled the dogs has been overwhelmingly positive. While many other countries identify the value of mental health service dogs, Australian veterans are better supported in this area than their counterparts in many countries.

If eligible and accepted for this program, DVA will cover most of the costs through the program including the training and supply of the psychiatric assistance dog.

The United States has been using service dogs since the end of World War I, initially as guide dogs for the blind, however soon expanding into the area of mental health assistance. Although in the US the use of mental health service dogs is widespread, the US Veteran’s Administration does not cover the cost of the dog or for boarding, grooming, food or other routine expense associated with owning the dog however it does cover veterinary expenses.

“This initiative announced by Minister Chester in 2019 is a great step forward in allowing more veterans to gain access to professional and accredited assistance dog services. We look forward to expanding our service to continue our mission of supporting those who serve,” Brigadier Holmes said.