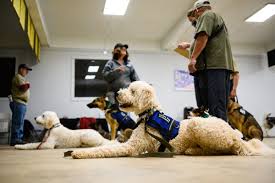 Trying situations that Tyler Lawrentz experienced after serving in the U.S. Marine Corp affected his sleep, his marriage, and his everyday life.

Veteran Travis Cobb’s experiences while serving in the U.S. Army Reserve also sent him into a dark spiral. Because of “extreme anxiety,” for a while, he wouldn’t leave his house.

.Lawrentz and Cobb credit a program offered by U.S. Navy veteran Bill Brightman for the positive changes in their lives.

The program trains veterans to train their dogs, a responsibility that gives veterans a purpose, confidence, and the support needed to regain normalcy. That responsibility is also a reason for the success of the program, as well as a reason why Brightman is being honored as a Greenville News Community Hero.

The Community Hero program, sponsored by the Greenville Federal Credit Union, is a way of highlighting the generous, noble, and selfless work of those among us who work tirelessly — often behind the scenes — to make our community a better place.

Brightman was nominated for the honor by Service Dogs for Veterans’ volunteer staff.

“Since its inception in 2014, the Service Dogs for Veterans training program has achieved life-changing results for 66 military veterans and their dogs. Currently, 34 teams are in the training program, with many of them on track to graduate as certified Service Dog Teams before the end of the year,” the volunteers said in their nomination letter.

“Bill is the heartbeat of Service Dogs for Veterans,” the letter said. “His kind, gentle, and soft-spoken approach creates a safe space for healing. He is both a leader and a benevolent father-figure to many in need,” the letter said.

Brightman said if the recognition brings attention “to what we do with the amazing creatures (dogs) that God has given and how they can help veterans who come back and cannot live the life they lived before they went in the service because of their diagnosis of PTSD, traumatic brain injury and in some cases, military sexual trauma, I’m thrilled.”

He also gives praise to the veterans in the program, their dogs, and all the graduates who’ve returned as volunteers to work in the program.

“The thing that makes this program go is the generous donations from our veteran-loving community,” he said.

Brightman moved to the south from Pennsylvania in 2013 because of his wife’s “love for the outdoors and her dream of year-round gardening.” Another impetus for the relocation was his desire to volunteer at an organization that was training service dogs.

When he got here, he couldn’t find one. Brightman said he visited Connie Cleveland, owner of Dog Trainers Workshop in Fountain Inn, and asked her about starting a program using her facility “if we could find some veterans that could use a service dog.”

Brightman started his program with two veterans and it has since grown.

“We’re now at the point where we’re training at another facility as well to keep all the classes going four nights a week,” Brightman said. “It’s turned into more than a full-time job. That’s why it’s gone from no volunteers and just me, to me and 19 others.

“We’re all kindred spirits,” he said. ”It’s not a job. It’s a calling. We love the rescuing of dogs for this work and helping our veterans achieve a normal life.”

Service Dogs for Veterans is an approximately 30-week program.

Along with the incredible bond between dog and veteran, graduates are experiencing a reduction in their life-limiting symptoms ranging from 15% to 83%. Graduates also report similar reductions in their take-as-needed medications and the need for counseling appointments, the letter said.

After-graduation support includes a Workforce Development Program for assistance in making education and job decisions, involvement in the Pet Therapy program in partnership with local Paws2Care, regional graduates’ monthly meet-ups to continue the camaraderie veterans experienced during the Service Dogs for Veterans training, and the ability to retake any class at any time at no expense, the letter said.

Lawrentz said he’d not been able to get a lot of help with his post-service battles from the Veterans Administration, which is why he got a dog. In his search for options to provide training for the dog, he stumbled upon Brightman’s website.

“The thing that really drew me to it is it’s not that I send my dog somewhere to get them trained, I’m trained how to train my dog,” he said. “We help build that bond.”

His German Shepherd, Sirona, has been a “godsend.”

Since Cobb received Kam, a Japanese Akita-golden retriever, the two have also been inseparable.

“He gives me something to appreciate, something to love. He gives me a reason to get out of bed,” Cobb said. “I’d be miserable without him. I don’t know how depressed I would get if I didn’t have him. A lot of veterans experience that. They get so depressed that the end result is tragedy. So having him, I can honestly say, saved my life.”

Every graduate has their own story and new hope in their lives when they leave the program, Brightman said. Many of them are able to achieve a goal they didn’t think possible, he said.

“One of the most frequent compliments we get from veterans is that they can sleep now,” Brightman said. “The haunting memories that keep them awake and that they have to take drugs for, the dogs take care of that.”