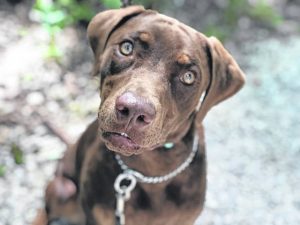 Coco the therapy dog has only been on the job for a few months, but her effect on the Delaware County Emergency Communications 911 Center can already be felt, according to county officials.

Coco is a Catahoula leopard dog who started working as a therapy dog for the county in May. Her handler, 911 dispatcher Karla Jacobs, said Coco will primarily work with first responders in the county to provide emotional support.

According to her page on Delaware County’s website, Coco will “attend any crisis intervention/peer support team callouts, fire department open houses, safety towns, fire/EMS/police departments to visit or when needed after an incident, other 911 centers, county offices/buildings, sheriff’s department appearances, other outreach opportunities, and to the 911 Center with the dispatchers.”

Jacobs said Coco was rescued by Come Sit Stay Kennel, and the kennel believed that Coco had the right demeanor for the job.

According to Jacobs, just having Coco around in the 911 center is a benefit.

“Her strong suit at this point is just being a distraction for the first responders and dispatchers,” Jacobs said. “She can sense when people are in a bad call or are stressed, and she’ll go over. Just her presence in the room and being around the first responders brings a different aura to the environment.”

Jacobs said Coco has already responded to two emergency callouts and has helped relax everyone involved.

“Just the presence of a dog takes your mind off of what is currently happening,” she said.

Patrick Brandt, director of Delaware County Emergency Communications, said Coco is “doing very well” in her role with the county, and she can be very useful at debriefings of crisis situations where people may have difficulty talking about what happened.

“A lot of people don’t know what to say or how to express themselves, but she’s a good intro to that,” Brandt said. “They can talk about the dog and their own pets, and open up a little bit.”

Brandt added he’s not aware of any other dispatch centers who have a dog on staff, and Coco is paid for entirely by donations.