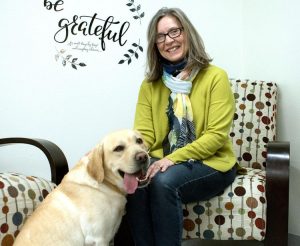 His full name is Shilohs Magnanimous Black, but he goes by Magnus for short. He’s young, he’s playful, and his blonde hair has a tendency to get everywhere. He’s the new therapy dog at Cody Middle School, training to help the students calm down and even learn.

Magnus isn’t a service or emotional support animal – one specially trained for a specific person. Service animals have a specific function, commonly seen as guide dogs for people in need.

An emotional support animal provides support and comfort to an individual owner and, to become official, must be prescribed by a mental health professional.

Magnus is neither of those things. One of the key differences, said owner and handler Kori Black, is that Magnus as a therapy dog can help anyone.

“A service animal is specially trained for a person with a disability,” Black, a counselor at CMS, said. “He’s here for everyone else.”

A therapy dog like Magnus, who will go through optional certification tests in February, is another tool in the toolbox for Black to work with students. He’ll be trained in a variety of areas, including animal-assisted therapy and animal-assisted education.

In addition to therapy, Magnus is being trained to help the students with their education, by being a friendly ear to read to or a way for students to practice some fine motor skills, like working with buckles.

Using animals in therapy has a long history and has been studied heavily by psychologists. Multiple studies show therapy dogs have a positive effect both on mental and emotional health, as well as improving reading outcomes when used with another program.

Of course, Magnus will not become the counselor or the teacher. The British Lab is simply another way to reach the students. Having an animal in the room helps build a rapport between counselor and student as well, said Black, increasing the trust between the student and the adult.

“When kids see me, they may not me know me or there may be stereotypes with the counselor, but now I’m the lady with the dog,” she said. “That’s cool. That helps build relationships. It’s like having a cool friend.”

Therapy dog programs like the one started at CMS have had their detractors, with some accusing counselors or others who bring the animals into school as just wanting their pets around.

“Can I lie and say it’s not nice having him here three days a week?” Black asked. “That would be a lie. But it’s not about that. He is specifically here for a reason. He’s specifically working, and that’s what’s important.”

While Magnus is Black’s dog, she is taking extra care to avoid those accusations by becoming a certified handler and putting Magnus through a training and certification program to keep everything above board.

“As a therapist through the American Counselors Association, they just trust my professionalism to choose an animal, to get the training,” Black said. “I wanted to something else that I could show, ‘Hey, we’re going to do this right. We’re going to do it well.’”

The community has already shown its support for the program. Black said she got six emails from parents who were excited about the addition. Even so, her concern is not with the public perception of the pilot program, but with the students.

“It’s more likely there will be concerns of allergies and fear of animals,” Black said.

Magnus is going to stick around the middle school, but other counselors can see him in action and learn about his role. That may inspire them to get their own therapy animals.

“In that way, I’m opening the door for them,” Black said. “If they think that there’s benefit of it, then they can bring in an animal and use it in their practice,”