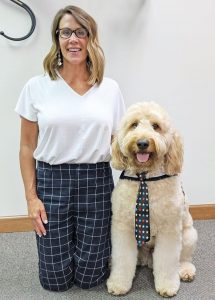 Chewie the therapy dog is not quite Clifford the Big Red Dog, but at 85 pounds, he’s a pretty big guy. He’s also a pretty big help at Park Hill Elementary.

Chewie, a Goldendoodle, is a certified therapy dog who spends much of his time at Park Hill helping special needs students. It’s his calling, his owner Jen Gage said.

Gage, who is the office manager at Gage Chiropractic, had a lifelong calling to work with special needs kids. As a child, Gage struggled with reading in school.

“As a kid, I hated to read out loud,” Gage said. “I felt very insecure, and I would have to go to special reading groups.”

A few years ago, Gage started researching how dogs could be helpful to kids struggling with reading. She thought that “maybe I could help a child and make them feel a little bit more confident and competent.”

Chewie got his therapy dog certification back in 2016. He started out by spending time with young cancer patients at Wesley Medical Center.

The cancer doctor Gage was connected with at Wesley ended up leaving the hospital, so Gage needed to find somewhere else for Chewie to help.

“Around that time, [Park Hill Principal Sandy Rusher, a client at Gage Chiropractic], brought it to my attention that she would love to have a dog,” Gage said. “So I thought, ‘Well, here’s my opportunity. God works in mysterious ways.’”

Before COVID-19 shut down schools, Gage and Chewie would go to Park Hill and spend time each week with the SLC classes. They would go to recess with special needs students every Monday. On Wednesdays, she and Chewie would visit kids in different classrooms and grade levels and read with them.

“It just makes my heart happy when I see those children light up just because of a dog.”

Once the coronavirus hit and schools went virtual, Chewie wasn’t seeing the kids anymore, and he seemed a little down, Gage said. So Gage made Chewie a Facebook page and started posting pictures of him every day. She also sent pictures of him dressed up in different outfits for Derby Public School’s spirit week.

Sandy Rusher will serve as principal

at the new Stone Creek Elementary in

the fall, and Gage and Chewie plan to follow her there too.

“But I’m also going to continue at Park Hill, because the SLC class has made such great strides in two years,” Gage said. “I don’t want to stop doing that, so I’ll continue at both schools.”

When he’s not at a school, Chewie can be found at the Gage Chiropractic office. Patients young and old love seeing him there.

“A grown man will walk in here, and then it’s just baby talk,” Gage said. “There’s a woman who’s 87 years old who brings treats for him every time she sees him.”

Chewie may be a big guy, but he’s got a cool demeanor. Gage said she sometimes calls him Bob Marley “because he’s just

“With the kids, he’ll lay down, and they’ll lay on top of him and read,” Gage said. “He’s just very relaxed.”

Chewie may soon be expanding his services even further. Recently Gage and Chewie crossed paths with a Derby High School SRO officer, and the officer recognized Chewie and asked for his business card. Chewie might help at the high school with some of the higher-anxiety students.