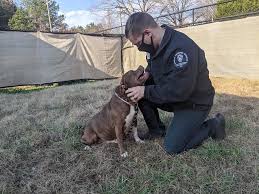 Stories about homeless dogs and cats are emotional risks, especially for those of us who cry at SPCA commercials and refuse to finish Marley & Me. It’s been a hard year; no one needs suspense. So I’ll give it away now:

This is a happy story made up of nearly 5,000 other happy stories of rescued cats and dogs, which may lead to an even happier milestone for Charlotte — having one of the most successful municipal animal shelters in North Carolina.

One of those happy stories is Tiger’s. The former stray dog took his first trip to Asheville this summer, where he discovered a love of hiking and barbecue.

Another belongs to Sweet Potato, the kitten who learned that any place is a good place to nap: on a dog, in a potted plant, atop her owner’s head.

Tiger and Sweet Potato began their journeys this spring at Animal Care and Control, a division of Charlotte-Mecklenburg Police Department, at its southwest Charlotte shelter. Nine years ago, only 35 percent of the cats and dogs who came through here were saved. This year, almost 90 percent have found their happily-ever-afters.

Almost 90 percent. That’s a big almost. A 90 percent save rate would mean the shelter has earned the no-kill designation. While that’s fairly common for nonprofit rescue groups that control how many animals they accept, it’s the exception for municipal shelters that, as a public service, must accept all stray and surrendered animals — even when they run low on space or budget.

Charlotte’s municipal shelter just might make it. It comes down to the next eight days.

As of mid-December, AC&C’s annual save rate is 89.7 percent, up from 79 percent last year — and way up from that 35 percent nine years ago. Depending on how many dogs and cats are adopted in the next week and a half, AC&C might earn the no-kill designation for the first time.

“We had a meeting of the management team here and we said, ‘Listen, as long as we have animals coming in — from the field, through owner surrender, however else — we have got to find a way to get them out in a positive manner,” says Josh Fisher, AC&C’s director. “It just was simply not acceptable to us to do anything but that.”

Fisher joined other animal control professionals who petitioned Cooper to designate municipal animal shelters an essential service. Cooper granted their request, and AC&C remained open for adoptions, with limits on the staff and visitors allowed inside.

But, Fisher wondered, would anyone even want to adopt a pet during a pandemic?

Oh, how they did. Adoptions accelerated. He was stunned.

Nicole Beasley of Plaza Midwood isn’t surprised by the rush on adoptions. She adopted Tiger — hiking-loving, barbecue-loving Tiger — from AC&C in April, while grieving the death of her grandfather and coping with the stress of the quarantine.

Outdoor exercise. Staying home. Laughing. The most helpful things we could do for our physical and mental health were moments so easily inspired by our pets.

In 2020, it’s up for debate: Between pets and people, who’s really talking care of whom?

“They are the ultimate antidepressants,” Russell Varner says of dogs and cats. In early April, he and his wife, Sara Borer, decided to foster a cat after they read that animal shelters were in danger of filling. They ended up fostering six from AC&C: a mama and her five two-week-old kittens.

“Especially in the early months (of the pandemic) — when cases were rising, no one really knew what was going on, some people were following rules and some weren’t — there was so much negativity,” Varner says. “If I needed a distraction, I’d just go upstairs and play with all the kittens, and they’d just pile on you and lick you.”

One day as Varner worked, Sweet Potato — the runt of the litter — climbed on top of his head and fell asleep there. That moment, Sweet Potato was no longer a foster. She was home.

A study published by the American Psychological Association showed that pets have alleviated the stress of uncertainty and isolation during Covid-19. But a city like Charlotte — no stranger to dogs at breweries or cats on leashes — doesn’t need a study to teach us the importance of pets.

“It speaks to the value that Charlotte has for the human-animal bond … not just the pets themselves but caring for both ends of the leash,” Fisher says.

AC&C’s success comes from tapping into that community spirit. It continually unveils programs for the public, including the popular staycations that allow people to borrow a dog or cat for several nights to give it a break from the shelter. (Not surprisingly, 70 percent of those staycationers become permanent pets.) AC&C also collects funds and supplies for Human Animal Support Services (HASS); when people facing financial hardship come to the shelter to surrender loved pets, HASS offers them support to bring their pets back home.

“For a long time, people viewed animal overpopulation as a shelter problem,” Fisher says. “But they know now: it’s a community problem that needs a community solution.”

It’d give us more dogs like Tiger, who began the year wandering a field as a stray and now has a stack of Christmas presents waiting for him. It’d give us more cats like Sweet Potato, born in an animal shelter but who is probably — as you read this — playing with ornaments and garland on the tree. And it’d give us more people like Beasley and Varner, who found the love of a pet is a powerful medicine, even in a pandemic.

“I’ve joked that Sara and I wouldn’t have kept our sanity this year if we didn’t have the kittens,” Varner says. “But every joke has a little bit of truth to it.”