Chaise Gets A Service Dog 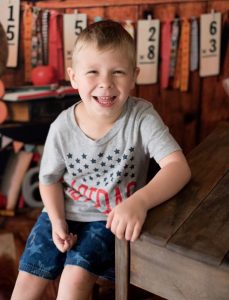 An “outpouring of love from our community” has resulted in a Shelocta family’s success in quickly raising $18,000 for a trained autism support dog for their son.

The story of the Clouser family — parents Ashley and Justin and sons Chaise, 6, and Conner, who turns 2 in October — was featured in the Sept. 13 edition of the Gazette, where they described their journey to fundraise for a dog from 4 Paws For Ability, a nonprofit organization that provides service dogs.

The dog would assist Chaise, who has a diagnosis of autism and ADHD, as the COVID-19 pandemic has increased the behaviors associated with his condition and turned his world upside down, they said.

The Clousers thought the fundraising journey would be a long one.

But an unexpected donation, coupled with a few fundraisers and community support, ended their fundraising journey in just a few weeks.

“My initial thought was that we would be planning fundraisers and events for at least six months up to a year to raise money for Chaise’s service dog,” Justin said.

“It has always been evident that we live in a very uplifting community, but never in my wildest dreams did I envision the fundraising process to last less than three weeks,” Ashley said.

Donations came from family, friends and “even strangers that took the time to donate and share our story on social media. That allowed for more awareness and ultimately us meeting our goal rather quickly,” Ashley said.

There were more than 110 donors for the effort.

Jeff Duffner and wife Angela, of Horizon Stables in Apollo where Chaise receives horses therapy, “worked tirelessly with Debbie Schultz at Schultz’s Sportsman Stop in Apollo to help organize three gun raffles that has helped us raise over $2,500,” Justin said.

A Facebook fundraising page listed $5,470 in donations as it closed.

Then, on Sept. 16, there was a phone call from someone interested in the status of the fundraisers and how much had been raised.

“Thinking that this person was just trying to figure out a fundraiser that would suit their needs, I provided all the information requested,” Ashley said. “This amazing couple then asked how much we still needed to raise. I explained a rough estimate and they indicated they needed a final amount as they were writing a check for the rest so we could focus on raising our boys rather than raising money.

“I honestly was like, ‘Wait, what?’ And as they continued to explain to me that this is happening, Chaise is getting his dog, I couldn’t help but fall to the floor in my kitchen and begin crying. This amazing couple just gave my son the lifeline we have been waiting for, and we feel so blessed.”

The Clousers said the donors wish to remain anonymous.

Once the pandemic has eased, the family plans to meet the couple and introduce them to Chaise and Conner.

“I explained that they are now considered part of our family and we are looking forward to getting to know them,” Ashley said.

Now that the money has been raised, Chaise can be added to a waiting list for his dog, as the canines are bred and trained on demand once fundraisers are complete. The waiting period is estimated at two years, they said.

After that, the family will attend a two-week training on handling the dog.

Prior to the pandemic, Chaise’s behavior was manageable, but the disruptions from the pandemic amplified incidents of biting, hitting and kicking to the point where Chaise was hospitalized at UPMC Western Psychiatric Hospital for the safety of himself and his family.

“We are confident that this new chapter in Chaise’s life will provide him with the coping skills to live his best life and honestly that’s all we want for him,” Ashley said.

Ashley said their family had reservations about asking others for help.

“We kind of felt guilty starting this journey, but with God’s guidance we have realized that this was not something we could handle on our own and set our pride aside to accept the generosity of our community in assisting Chaise,” Ashley said. “This couple and all our donors really have been amazing angels sent from God to help our son.”