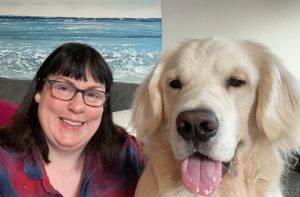 Casper the Therapy Dog is aptly named. The friendly golden retriever with the happy-boy smile is the ideal pup for tough times, and he’s been spreading love during the COVID-19 pandemic with his owner and philanthropic partner, Rachel Elliott.

The two have helped distribute 10,000 meals (though not all in Seattle) for medical professionals responding to the crisis as part of Fueling the Fearless, a nonprofit that pairs struggling restaurants, coffee shops and bakeries with folks who could use a break.

“I’m still getting texts from people that we visited at Swedish,” Elliott said earlier this year. “Like, ‘Can you come back? We’d like to see you.’ They’re not talking about the food. It’s the connection, like, ‘I see you, I hear you, I’m here for you and, you know, you can pet a dog’ kind of thing.”

Elliott and Casper love helping people, and soon they could be taking their campaign to a much wider audience. Elliott came up with the idea of a therapy-dog television series called “Love Unleashed” and has found a production partner in Hoplite Entertainment. They’ve begun preproduction on the show and hope to film in Seattle later this year.

“I pitched the idea and the producers liked it,” Elliott said. “So now we have a contract and we are in development. Hopefully this year we’ll be able to film. But that is a timeline based on when the world opens up.”

The show will focus on the therapeutic benefits of canine companionship. The National Institutes of Health (NIH) published the results of a decadelong study in 2018 that showed pets help reduce stress, improve heart health and even help children with their emotional and social skills. The NIH said therapy dogs are especially good at this when employed in hospitals and nursing homes.

This is, of course, not news to most pet owners — 68% of American households include a pet.

“They checked the cortisol levels in the saliva before and after and then later in the day,” Elliott said. “Just by petting a dog, it decreases the cortisol levels by 24% in a person. That decreases anxiety, keeps your heart and lungs healthy, lowers blood pressure. They’re starting to use therapy dogs in different ways that they didn’t even realize [were beneficial].”

Casper, now 4, is Elliott’s second therapy dog. She adopted him when he was 8 weeks old and has been training him for his role since. He passed the American Kennel Club’s obedience test with ease and is also certified for therapy.

It is clear he is a very good boy.

“Any dog, any breed can become a therapy dog,” Elliott said. “It’s more of the personality, obedience, things like that. That’s what’s great about therapy dogs. You can’t train a personality. He is who he is. He really knows his surroundings and what’s going on. It’s also getting them used to different surroundings. So right now with COVID, everyone’s wearing a mask. It doesn’t faze Casper at all.”