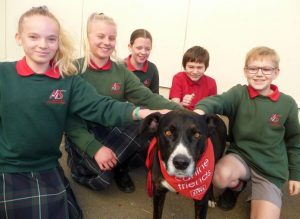 Therapy dog Jenson is putting smiles on the faces of students at Ashburton Intermediate School.

The eight-year-old collie/staffie cross trained for eight months to support residents in residential homes and still spends time at a Methven rest home, but he’s in his element at the intermediate school and is loved to bits by pupils.

Jenson spends most of his days in class 7/7 with his owner and class teacher Kristine Sheppard.

Mrs Sheppard said she picked him from the SPCA in Christchurch in the aftermath of the earthquakes.

He is named after the British sports car, Jensen Interceptor.

He had not been treated well in his younger days, but had soon shown his caring, calm and loving nature.

Jenson had been in training as a therapy dog for a number of months through an organisation called Canine Friends Pet Therapy, she said.

He has been a regular fixture at the school for a number of months after acceptance by the board of trustees and after a number of protocols had been followed.

Year 7 student Jacob Robinson said Jenson went on walks with students and if they were upset he could sense their feelings and came over to comfort them.

“He’s super friendly and very gentle and we all love him.”

Classmate Anna Green said Jenson cheered up children who were feeling a bit down and he loved all the attention.

“He’s got a ball called Wilson, which we throw for him, and hanging out with him just makes you happy and feel good.”